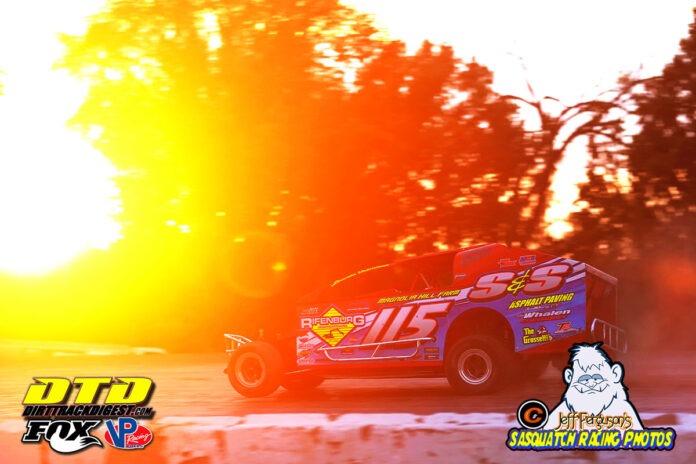 WEST HAVEN, Vt. – Devil’s Bowl Speedway is already prepared for the 2022 dirt track racing season to start. The historic Vermont track has announced the event lineup for its 56th season, which will once again run primarily on Saturday nights, from May 7 to September 24. In addition to the schedule, Devil’s Bowl promoter Mike Bruno officially announced the creation of a new “Rookie Sportsman” division to be added to the weekly lineup.

Among the schedule’s many highlights, Devil’s Bowl Speedway fans will welcome the exciting Short Track Super Series Modifieds for the first time on June 19, and they will once again be the home crowd for the country’s highest-paying Sportsman Modified race as the “Vermont 200” returns on Labor Day weekend, September 3-4. The Enduro Series will have seven events beginning on May 14, the Mohawk Valley Vintage Dirt Modified Series will finally return on July 23, and special interactive fan promotions will highlight the season, with the possibility of more special races or touring series to be added during the season.

A change in 2021 to weekly Saturday-night events with a Sunday rain date proved to be wildly successful, resulting in an influx of new drivers and teams. Bruno believes that his program will continue to grow in 2022, and the new Rookie Sportsman class is indicative of that. Early estimates show around 15 eligible teams that will ease the current overload of the Limited Sportsman division, which exploded in 2021 to average 33 cars per event. Drivers must meet certain levels of experience-related criteria to be placed in either the Limited or Rookie fields.

“We have great momentum at Devil’s Bowl right now,” Bruno said. “I’ll never complain about having too many racecars and I’ll never take that support for granted, but we had to give the Limited Sportsman racers a fair shake, and the new Rookie division will do that. We want to keep rewarding our racers and fans with great action at affordable prices. I’m excited for 2022 already, and I wish we didn’t have to sit through the winter and wait!”

The season begins on Saturday, May 7, with a regular-distance 30-lap “draw race” for Sportsman Modifieds paying a whopping $3,000 to win. The weekly Limited Sportsman, Super Stock, Mini Stock, and 500cc Mini Sprint divisions will also open their seasons, along with the new Rookie Sportsman class.


For the second year in a row, the first major event will be the “Northeast Crate Nationals” on Memorial Day weekend. Weekly support divisions will run their qualifying and features on Saturday night, May 28, and the Sportsman Modified division will have a one-day show on Sunday, May 29, to include all qualifying and the 100-lap, $5,000-to-win main event. The Sprint Cars of New England tour will also be in town on Sunday.

The Bob Hilbert Sportswear Short Track Super Series (STSS) Modifieds will make their first Devil’s Bowl appearance on Sunday, June 19, as the Brett Deyo-led tour comes to Devil’s Bowl Speedway for the “Slate Valley 50.” The event will pay $10,000 to win and $500 to start, and it is expected to draw the top names in dirt racing including 2021 STSS champions Matt Sheppard and Mike Mahaney. The Slate Valley 50 will mark the northernmost STSS race in history and its first in Vermont or any of the six New England states.

Independence Day weekend will once again bring about Devil’s Bowl Speedway’s famous fireworks show on Saturday, July 2. The event will be jam-packed with racing as the SCoNE Sprint Cars return, all six weekly divisions will compete, and the wild-and-wacky Enduro Series will crank up the excitement.

The fan-favorite “Battle at the Bowl” returns on Sunday, August 7. The event offers local fans a second glimpse of the stars of dirt Big Block/Small Block Modified racing, with an independently-sanctioned show featuring a unique, three-feature format and a $10,000 top prize. The feature winner list at the 2021 Battle at the Bowl included Sheppard, Stewart Friesen, and Anthony Perrego.

The fifth annual “Vermont 200” will be the center of attention on Labor Day Weekend, and Devil’s Bowl Speedway will once again pay the biggest purse of the year for the General Motors “602” crate engine-powered Sportsman Modified division. Zach Sobotka won the 2021 edition and captured nearly $13,000 in winnings after defeating a field of 62 entries.

Devil’s Bowl Speedway’s 56th season of racing wraps up with Championship Night on Saturday, September 24, as the title winners will be crowned in all divisions. The Enduro Series will close the year in bone-jarring style with a 100-lap finale at the end of the night.
Competitor registration forms and membership licenses are available, and information for season passes for both general admission grandstand seating and the pit area will be revealed soon.