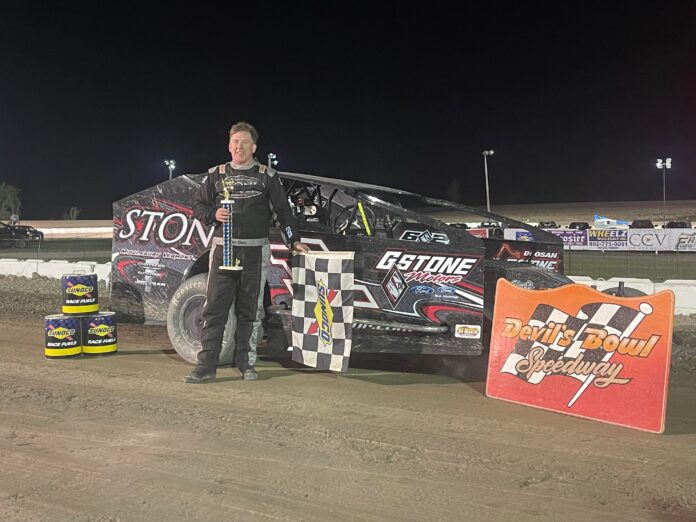 WEST HAVEN, VT – For Todd Stone 2014 was an eternity ago and 2022 has been knocking him down like a Tyson Furry opponent. It didn’t stop a resilient G-Stone Motors 1X team from rebounding to score an early season victory at ‘the bowl’ Saturday night. Other winners included Evan Roberts (Limited Sportsman), Kamden Duffy (Rookie Sportsman), Elmer Montville (Mini Stock), and Eric Leno (Enduro).

Brian Whittemore and Todd Stone would lead the 28 car Sportsman Modified field to the green with Stone quickly taking the lead. The field would be slowed to a red flag stop early, as the MJ Pelter Construction number 13 of Frank Hoard III was upside down. To everyone’s surprise, Hoard would show toughness as he returned to racing action.

Evan Roberts is off to a strong start in 2022 in the Limited Sportsman division. After opening the season with a 2nd place finish, he did one better Saturday night storming to the 25-lap feature win. Big mover on the night was Alex Layn who started 13th and finished 6th. Following the Friend Construction number 50X across the line to round out the top five were Randy Ryan, Steve Pope, AJ Munger, and Kyle Kerr.

Rookie Sportsman action started off the night with a red in heat races, when Bobbi Jo-Hults rolled her 12M over. She was uninjured and will return to race another day. In the feature event it was 14-year-old speedster Kamden Duffy who raced to victory from his 4th starting spot. He was followed by Steve Miller, Alex Palmer-Sawyer, Nick Austin-Neil, and Adam LaFountain who stormed form 16th to round out the top five.

Winning the 500cc Mini Sprint feature event was the cherry on top of a victorious ice cream treat if you’re Lane Saville. He had to accomplish such a successful run after starting 10th at the drop of the green in the 15-lap feature go around. Kevin Smith, Roger LaDuc, Logan Denis, and Raelin Dunham would round out the top five.

Rounding out the evening a 29-car field assembled for the first 50-lap enduro of the season with $500 big ones up for grabs. Eric Leno was up for the challenge. He earned the win and spoils of victory.

Next up for Devil’s Bowl Speedway is a weekly racing event on May 21, 2022, featuring an action-packed show for all weekly divisions, plus Super Stock. Coming soon is Northeast Crate Nationals weekend on Saturday May 28th and Sunday May 29th. Pit gates open at 3 PM, grandstands open at 5:30 PM, and racing starts at 7 PM.