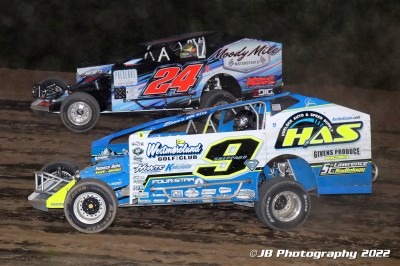 The Bob Hilbert Sportswear Short Track Super Series (STSS) Fueled By Sunoco heads to the ‘Green Mountain State’ for the first time in its history on Sunday, June 19.

Mike Bruno’s Devil’s Bowl Speedway hosts Round No. 5 of the River Valley Builders North Region, the halfway point of the 10-race tour and the $15,000 championship chase.

Despite his two wins, Sheppard just took the point lead away from Wurtsboro, N.Y.’s Danny Creeden, who finished 13th in the most recent North Region race at Bloomsburg (Pa.) Fair Raceway.

Sheppard – who finished fourth in the ‘Battle at Bloomsburg’ – now leads Creeden by a 27-point margin. Sheppard battled back from two flat tires – one in his heat and the other in the 50-lap feature – to claim the top-five finish and inherit the point lead.

Creeden opened the North Region chase with three consecutive top-six finishes – including a runner-up finish at Accord (N.Y.) Speedway – before his 13th-place run at Bloomsburg Fair Raceway after a heat-race mechanical issue.

St. Catherines, Ontario, Canada’s Mat Williamson currently sits third in points, 35 markers behind Sheppard. Williamson – the winner at Accord Speedway – was running in the top-five before electrical problems plagued his night. The Canadian battled back for a 10th-place finish, keeping himself in the chase for the championship.

Three-time STSS champion Andy Bachetti enters Devil’s Bowl fourth in points, 41 markers off the pace set by Sheppard. The Sheffield, Mass., star has fought hard for consistent finishes to keep himself in the championship running. Bachetti finished in the top-seven in the first three races, before an 11th-place finish at Bloomsburg.

Middletown, N.Y.’s Anthony Perrego rounds out the top five in the standings, 95 points behind Sheppard. Perrego – the ‘Battle at Bloomsburg’ winner – missed the trip to Outlaw Speedway.

Sitting sixth through 10th, respectively, are Mike Mahaney, the defending Hurlock Auto & Speed South Region champion; Danny Tyler, whose STSS campaign is highlighted by a fifth-place run at Accord; Bobby Hackel and Brett Haas, who are tied for eighth, just 19 points outside the top-five; and Mike Gular rounding out the top-10.

Joining the STSS Modifieds will be the Devil’s Bowl Speedway Sportsman, Limited Sportsman, and Mini Stocks.