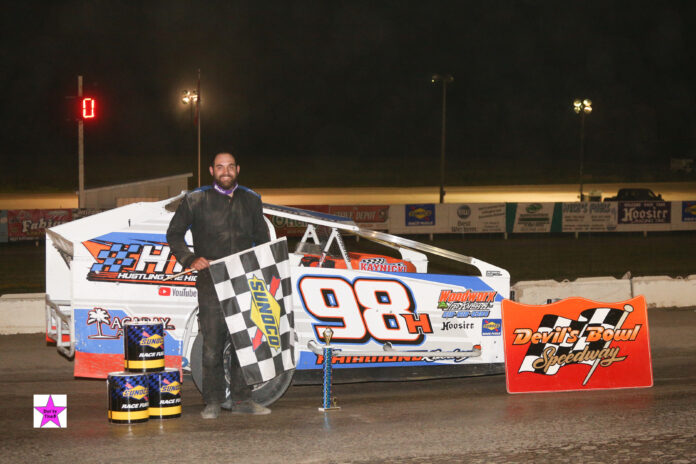 WEST HAVEN, VT – On G-Stone Motors night Walter Hammond gave kiddie rides at the mid portion of the program. Then he gave friends, family, and fans a ride to victory lane after picking up the Sunoco Sportsman Modified 30-lap feature win on Saturday. Evan Roberts, Robert Gauthier, Chris Conroy, Chris Lennox, and Chris Murray also picked up wins this weekend at the bowl.

Adam Piper and Brian Whittemore led the 27-car Sunoco Sportsman Modified field to the green, but it was Walter Hammond who marched to the front with his WH Building & Design number 98H from his fourth place starting spot and took the lead just past the midway point in the event.

He had some late race challenges from Tim LaDuc who at one point slipped past Hammond, but suffered mechanical failure sending him to the pits. Todd Stone then challenged using the bottom, as Hammond was ripping the lip, but Walt wasn’t going to be denied the win. He was followed to the checkered flag by Todd Stone, Tanner Siemons, Josh Masterson, and Justin Comes rounding out the top five.

Evan Roberts continued to be red hot picking up his third O’Reilly Auto Parts Limited Sportsman 25-lap feature win. He did so impressively by charging from his 16th starting position to earn the win after taking the lead late in the event from then leader Justin Lilly. Lilly, Hunter Nutter, Tim Aldrighetti, and Scott Fitzgerald rounded out the top five finishers.

Robert Gauthier put in work and earned his first 20-lap Hoosier Daddy Racing Rookie Sportsman feature wins of the season. He wasted no time taking the lead from his third starting spot and never looked back. Rounding out the top five finishers were William Lussier Jr., Daryl Gebo, Randy Edson, and Camden Duffy.

Chris Conroy had himself a day after storming from 14th to victory lane in the 15-lap Mini Stock feature event. It was his first win of the season at Devil’s Bowl. He was chased to the checkers Mark Mahoney, Tyler Bell, Clemmy Bell, and Griff Mahoney rounding out the top five.

Chris Lennox parked it in victory lane for his first Friend Construction 15-lap 500cc Mini Sprint feature win of the season. He was followed by Kevin Smith, Logan Dennis, Raelin Dunham, and Chayton Young who completed the top five finishers.

Chris Murray picked up his second 15-lap Super Stock win of the season at the bowl, with Josh Bussino, Andrew Fitzgerald, Jimmy McKiernan, and Mike Bussino rounding out the top five.

Next up for Devil’s Bowl Speedway is the annual Independence Day Spectacular including the largest Fireworks display in Central Vermont. All weekly divisions will be in action (no Super Stock) plus the SCONE 360 Sprint Cars. Pit gates open at 2 PM, grandstands open at 4:30 PM, with racing scheduled to start at 6 PM.