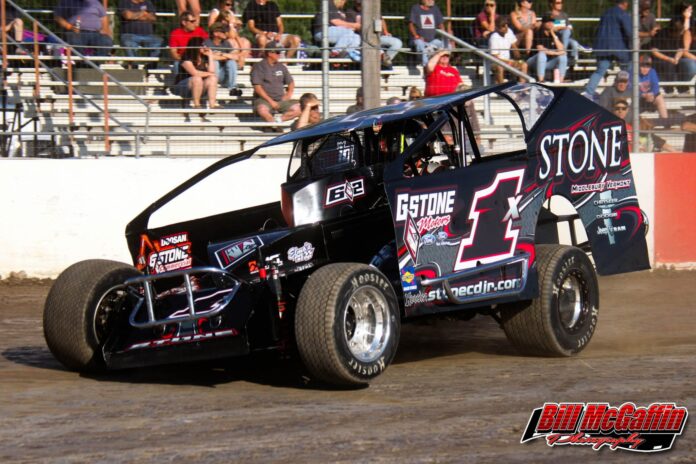 Jimmy Ryan and James Hanson led the 29-car Sunoco Sportsman Modified field to Bob Bigelow’s green silk, with Ryan taking charge early. The Shoreham, VT driver would set the pace with his McGee Family Racing number 60 until lap 12 when Dylan Madsen came to the party. The Spencertown, NY driver took the lead and started to run away behind the wheel of his Madsen Overhead Doors ride.

Little did Madsen know there was a G-Stone storm brewing behind him. Middlebury, VT hot shoe Todd Stone was charging from his 17th starting spot to challenge for the lead in the closing laps. The two would swap the lead, but Stone put himself in position to win after a late race restart driving his Stone Chrysler, Dodge, Jeep, and Ram race rod. Madsen, Jimmy Davis, Tanner Siemons, and Justin Stone would round out the top five finishers.

Hunter Nutter was back in victory lane for the second time this season after winning the O’Reilly Auto Parts Limited Sportsman 25-lap feature. The Orford, NH driver started up front and held off challenges from Gary English early to earn another win with his H&R Block ride. He was followed by AJ Munger, Randy Ryan, point leader Evan Roberts, and Bubba McPhee who completed the top five finishers.

Jarrod Colburn raced his way to win number one on the season in the 15-lap Mini Stock A-Main. A huge triumph, as word on the street is he hasn’t visited victory lane since May 29, 1993. A very popular victory indeed for the Rutland, VT driver in his Jan-Jerry Racing number 3 Neon. Austin McKirryher, Chris Sumner, Brian Blake, and Matt Wade rounded out the top five respectively.

Roger LaDuc raced his way to another Friend Construction 15-lap 500cc Mini Sprint feature win on fan appreciation night. It was the third win of the season for the Orwell, VT driver in his Browns Auto Salvage number 54. Rounding out the top five finishers were Logan Dennis, Kevin Smith, Vern Woodard, and Raelin Dunham.

Next up for Devil’s Bowl Speedway is a very special Hometown Heroes Saturday night with twin 20’s for Limited Sportsman competitors. All weekly divisions will be in action with pit gates opening at 3 PM, grandstands opening at 5:30 PM, and racing scheduled to start at 7 PM. Another must see event.