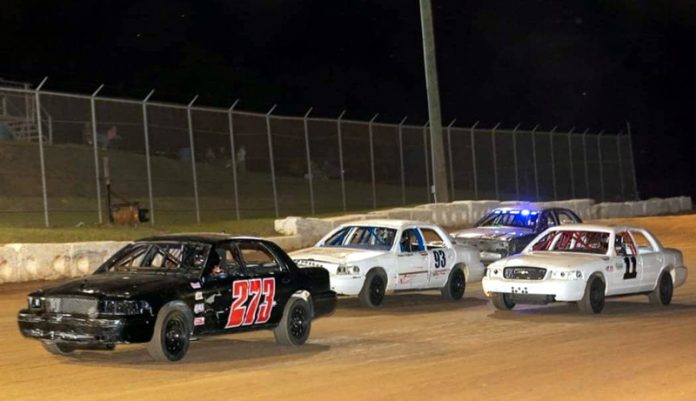 WEST HAVEN, VT-Devil’s Bowl Speedway promoter Mike Bruno has been aware of declining car counts in Super Stock competition for a couple seasons now. Not just at the bowl, but around the Northeast the class under current rules just seems to be dwindling. In some respects, they’ve priced themselves out, and in other aspects rules from one track aren’t necessarily legal at another. Something fresh is needed.

Being a promoter who travels the country taking in all kinds of racing venues one division from the heart of Georgia stood out, a field of Crown Vic racers. It’s been some time in the Northeast since a fresh division was spawned for weekly competition, especially cost-effective entry-level racing where a driver could do the bare minimum to show up weekly and race. Devil’s Bowl just might have the idea.

Most race fans love a full-fender frenzy, and Crown Vics would fit right in with the already loaded Mini Stock division weekly at Devil’s Bowl. To the aspiring racer the basics are get a rear-wheel-drive Crown Vic (or Grand Marquis), keep it bone stock, make sure all four tires are DOT legal and the same size, put a roll cage in it, secure doors, hood, and drunk, then bring it to the track for some door-to-door action.

More detailed rules will be available in the coming weeks, but there is already a buzz about the idea after Bruno mentioned it one Tuesday night on his live Let’s Talk Racing show co-hosted by the ever-knowledgeable Marty Kelly III.

“There are already 8 or 9 guys that have contacted me about this division. They’re actively looking for cars to put together,” said Mike Bruno, promoter of the great crate place.

Keep your eyes open to Devil’s Bowl social media and website, which are always very active with the latest news. The goal if possible is to host a Crown Vic race later in the season as an introduction of the class to the fans. From there growth of the division has much potential.