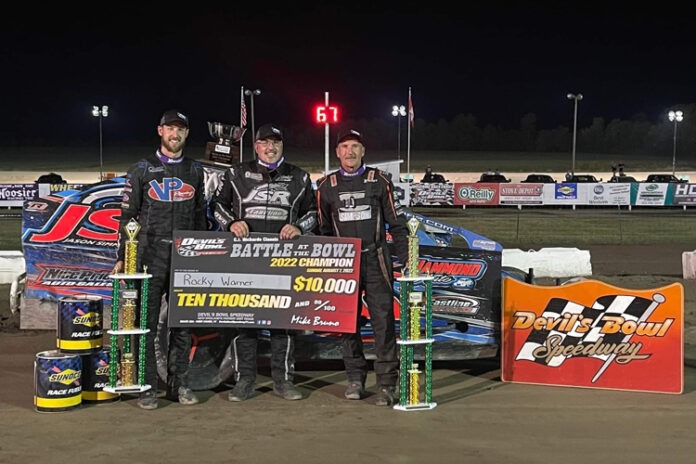 WEST HAVEN, VT – Rocky Warner had ten thousand reasons to smile on Sunday, August 7, at Devil’s Bowl Speedway. The Gloversville, N.Y., driver waited out a two-hour rain delay to win $10,000 at the fourth annual “C.J. Richards Classic/Battle at the Bowl” for Big Block and Small Block Modifieds with a convincing drive.

The night was full of meaningful firsts, as Warner, Justin Comes, and Randy Ryan all ended multi-year winless streaks at the Vermont track, Adam Mahoney won for the first time in 2022, and Cody Dion scored his first win ever. Warner was electric in the 67-lap main event. “The Flying Squirrel” started 11th on the grid and blasted his No. 98 Jason Simmons Racing machine through traffic early in the race and then took the lead from fellow for Fonda Speedway champion Tim Fuller just past the halfway mark. From there, Warner ran away and hid for the lucrative victory – his first at Devil’s Bowl since the 2019 Vermont 200.

Fuller’s run was also impressive, coming from 10th at the start to ultimately finish second. Mike Mahaney continued his recent run of strong finishes at Devil’s Bowl in third place, while Marc Johnson came alive late for fourth place. Multi-time Sportsman winner Jack Speshock had one of the best Modified races of his career, finishing fifth and running among the leaders throughout the race.

Middlebury, Vt., native Justin Comes finally returned to the winner’s circle in the 40-lap Sunoco Sportsman Modified feature. “The Highside Hustler” started on the front row after a random draw, and he was never seriously challenged for the lead. The win marked his first at his home track since June 2020 and was worth $2,000.

Invader David Rogers made his presence known in his first trip to Devil’s Bowl; the Can-Am Speedway star made the four-hour haul from LaFargeville, N.Y., to finish second. Championship point leader Todd Stone remained consistent and finished third. Johnny Bruno had a nice send-off to college with a 17th-to-fourth run in his final start of the season, and defending track champion Tim LaDuc rounded out the top five.

Randy Ryan earned the first win of his O’Reilly Auto Parts Limited Sportsman career in style, starting eighth and making a late pass of Jason Quenneville for the lead. Ryan, of nearby Orwell, Vt., made a bit of history with his breakthrough: His win was his first in 27 years, 10 months, and 13 days, since winning on September 25, 1994, in the four-cylinder GT class. The span between wins is the third-longest in Devil’s Bowl history, behind Jarrod Colburn – who set the record in July at just over 29 years – and Ray Nutting.

Quenneville’s performance as the runner-up was a career-best, and he led most of the race. Sixteen-year-old Evan Roberts built on his large point lead with a third-place finish ahead of Gary English and Alex Layn. John Gosselin was sixth, followed by Fred Little, Timmy Aldrighetti, Bob Kilburn, and Josh LeClaire. Heat winners were English, Layn, and Hunter Nutter, and Aldrighetti took the consi.

The Mini Stock division ran a pair of 15-lap features, with Rutland, Vt., drivers sweeping both races. Cody Dion scored the first “A” feature win of his career in the opening run. Former champion Chris Conroy mounted a serious challenge in the final lap but settled for second. Tom Severance finished third ahead of Matt Wade and Jarrod Colburn.

Adam Mahoney dominated the second race, needing just two laps to get from the eighth starting position to the lead and holding on to his first win of the season. Ronnie Alger finished second ahead of Austin McKirryher. Levi Cram was a career-best fourth and Chase Allen was fifth.

Devil’s Bowl Speedway returns to action on Saturday, August 13, at 7:00 p.m., with McGee Family Dealerships Night. All five weekly divisions will be in action with the Sunoco Sportsman Modifieds, O’Reilly Auto Parts Limited Sportsmen, Hoosier Daddy Racing Rookie Sportsmen, Mini Stocks, and Friend Construction 500cc Mini Sprints, and street-legal spectator races will also be on the card. In addition, McGee Family Dealer ships will give away a free two-year lease on a new vehicle to a lucky fan.