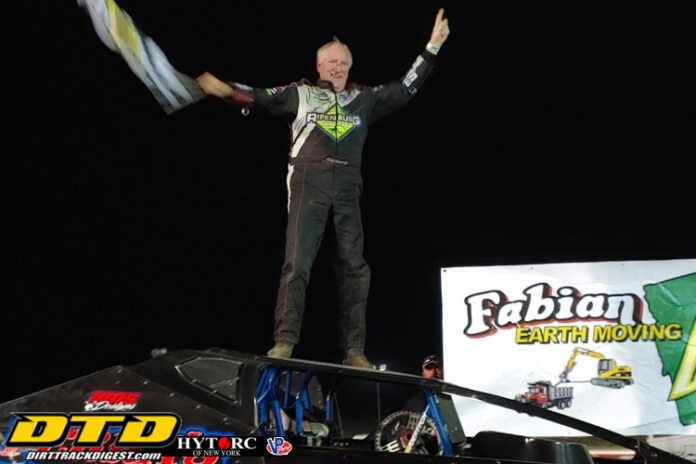 WEST HAVEN, VT – Kenny Tremont Jr. was not planning to race in the Fabian Earth Moving Vermont 200 at Devil’s Bowl Speedway on Sunday, September 4, but a late-night charge left him standing in victory lane $10,000 richer. The 10-time track champion’s triumph came in the biggest Sportsman Modified race in the country, which attracted 86 cars to attempt qualifying for 34 starting positions.

Tremont, who started 20th, was a non-factor until late in the Vermont 200. The show was a non-stop thriller between surprise drivers Michael Wagner-Fitzgerald and Brian Calabrese, who fought for the lead for three-quarters of the race. Wagner-Fitzgerald – a largely unheralded driver with only a few Sportsman wins in his career – took the lead from pole sitter Cedric Gauvreau on the opening lap and held it for 26 circuits. When Calabrese arrived, though, the battle caught fire.

Calabrese – a fast, often-controversial Sportsman veteran who has recently dabbled in the Big Block Modified ranks – nosed ahead on lap 27, igniting a remarkable duel that saw the pair officially trade the lead 17 times over the next 121 laps. Each driver dogged the other and pulled a slide job or two, mostly with Wagner-Fitzgerald running the extreme outside lane as Calabrese searched for grip elsewhere on the smooth, slick surface.

Calabrese took the lead for the final time on lap 148, but Wagner-Fitzgerald stayed in hot pursuit until he slid off the track with 35 laps remaining in the race. He kept his momentum up and rejoined the field inside the top-10 as the race stayed under the green flag, but a second trip off the track after rebounding into the top-five on lap 191 took him out of contention.

With the demise of Wagner-Fitzgerald, West Sand Lake, N.Y., veteran Tremont was able to engage with Calabrese. A restart on lap 174 aided his cause, and Tremont grabbed the lead on lap 176 and held it through the end of the race. Tremont’s entry was a surprise to most, as he was asked just a week before to drive a 2019 PMC chassis with a conventional torsion bar suspension, which has been considered antiquated in recent years. In a stark departure from his traditional red No. 115 car, Tremont drove a black No. 24J for lifelong friend John St. Germain Jr., whose father drove for Ken Tremont Sr. in the 1960s. The St. Germain entry was one of only four Pete Chuckta-built PMC chassis in the 86-car field and it was believed to be the only torsion bar car.

“Of all the races I’ve won – and I guess of all the ones I’ve lost – this is the one I wanted the most these last few years,” an elated Tremont, 60, said after the race. “This deal with John came together fast, and when we tested last week I knew we had a shot. I’m just so happy for these guys.” Tremont had previously finished second in the 2019 edition of the Vermont 200. The win was his 90th at Devil’s Bowl Speedway, extending his all-time record at the track.

Veteran Elmo Reckner – who won Saturday’s non-winners feature – capped a strong weekend in sixth place ahead of Justin Comes, Corcoran, Walter J. Hammond, and defending Devil’s Bowl champion Tim LaDuc. Hammond, who started 29th, earned the $100 Hard Charger Award posted by Eddie “Elmo” Allen in memory of the late Butch Jelley. Twenty of the 34 starters were running at the finish, and all were on the lead lap. There were 18 caution periods including a competition break at lap 101.

Gansevoort, N.Y.’s Wagner-Fitzgerald finished 16th but collected $3,200 in lap leader bonuses after pacing a race-high 115 circuits. Calabrese’s take for leading 60 laps was $1,700, and Tremont pocketed an extra $625 for his work in the final 25 laps.

The Sprint Cars of New England (SCoNE) tour made its third and final visit of the 2022 season to Devil’s Bowl with a solid field of 20 cars, but none could touch Stephentown, N.Y.’s Matt Tanner. The 25-lap race went off quickly, and Tanner wasted little time in driving from his third starting position into the lead. He ran away from the pack and scored his fourth Devil’s Bowl SCoNE win in recent years.

Six-time SCoNE champion Chris Donnelly was impressive in qualifying by moving from sixth to first in the first half-lap, but couldn’t repeat that success in the feature, settling for the runner-up finish. Cory Sparks used a smaller 305-cubic-inch engine against the SCoNE 360s to finish in third place ahead of Scott Holcomb and Floyd Billington. The top-10 was completed in order by Jake Williams, Matt Hoyt, Jordan Fornwalt, Lacey Hanson, and Clay Dow. Donnelly and Sparks won the qualifying heats.

Devil’s Bowl Speedway returns to action on Saturday, September 10 at 6:00 p.m. as Brown’s Quarried Slate and Brown’s Orchard & Farm Stand of Castleton, Vt., present five weekly divisions and a 50-lap Enduro Series race. Grandstand general admission is $12 for adults and free for children aged 12 and under, and Infield drive-in parking is $20 for adults and free for children. Tickets are available at the speedway on race day.