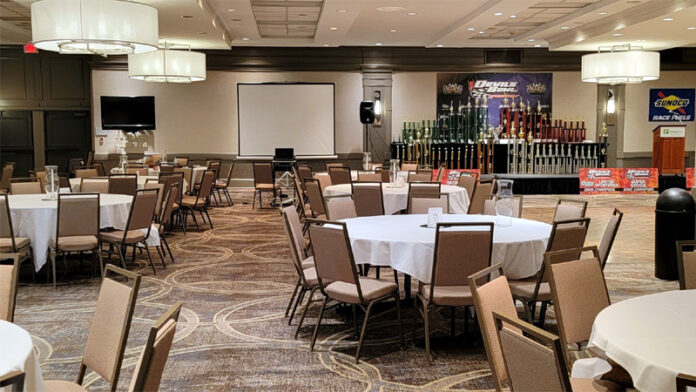 WEST HAVEN, VT – Devil’s Bowl Speedway officials are looking forward to the annual Banquet Of Champions celebration on Saturday November 5, 2022, at the Saratoga Springs Holiday Inn located at 232 Broadway in Saratoga Springs, NY. Officials, drivers, crews, sponsors, and fans will gather to celebrate and honor top competitors from the 2022 season at the great crate place.

The highly anticipated celebratory event will begin with a cocktail hour at 5:30 PM followed by pre-dinner awards beginning at 6 PM, with a dinner break at 7 PM, and awards resuming at the 8 o’clock hour. The celebration will wrap up with music and dancing following the awards presentations.

Track champions for each division will be officially handed their hardware for earning top spots in their respective weekly racing divisions highlighted by Sportsman Modified champion Todd Stone, who will take home his $5,000 share of over $25,000 in point fund monies. Other champions include Evan Roberts (Limited Sportsman), Logan Denis (500cc Mini Sprint), Chris Sumner (Mini Stock), and Chris Murray (Super Stock) will be honored along with specialty awards voted on by their peers.

Devil’s Bowl Speedway Banquet Of Champions continues to offer special awards along with the championships, trophies, and point fund monies distributed at the celebration. The Sportsmanship award carries a prestigious weight and goes to a driver who displays competitiveness, fairness, and respect to his or her peers. Most Improved awards go to drivers who have shown improvement both on and off the track.

There will also be special honors that include dedication to Devil’s Bowl that can be awarded to track officials, weekday staff members, or race fans that support the track with devotion, spirit, and dedication.

Also, one of the highest honors bestowed is the award of excellence each season, given to someone who is committed to the success and growth of Devil’s Bowl Speedway.

Finally, the highest honor of the evening is John Bruno Award, which is the most prestigious accolade one can earn. It is awarded to an individual who displays important principles set forth by Devil’s Bowl Speedway that may include lifetime contributions, highest principles, and extraordinary standards of conduct and respect.

The Banquet Of Champions celebration will be held Saturday November 5, 2022, at the Holiday Inn Saratoga Springs. Again, cocktails at 5:30 PM with awards beginning at 6 PM and dinner at 7 PM. For more information, visit www.DevilsBowlSpeedwayVT.com or email devilsbowlspeedway@gmail.com.

The Saratoga Springs Holiday Inn is located at 232 Broadway in Saratoga Springs, NY. Room rates in the aptly named “Devil’s Bowl Speedway Block” will be $129 each using the code DBS and includes free off-street parking.