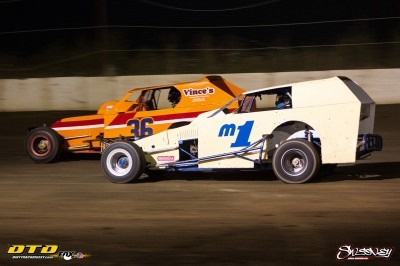 CENTER LISLE, NY – The Dirt Modified Nostalgia Tour made its second appearance in as many years this past Saturday night at the Thunder Mountain Speedway.

With the Canada/US border still closed due to the Covid 19 situation and personal/mechanical issues plaguing a half dozen or more American teams the Modified and Nostalgia classes were run together and once again Chip Gauthier of Granville, NY would claim Thomas Hodge checkers. But it was far from easy as once again younger brother Scott Gauthier of Mooers, NY and Frank Hoard Jr., also of Granville would give chase throughout.

The younger Gauthier would be able to show a wheel under the orange #7 on several occasions until Hoard would take the high side around Scott Gauthier for second with a handful of laps to go. The older Gauthier would prevail over Hoard, S Gauthier, Myron Haydt of PA and local racer Bill Leonard.

In the all new, high powered Unlimited class a field of 10 would run a very fast 15 laps with Modified drivers Scott Gauthier and Frank Hoard Jr. staying out after their feature to give it a shot.

Kevin Kuser of Boyertown, PA would blast into the lead in the Phillips Motorsports Mud Bus bringing heat 2 winner Mike Houghtaling, who had claimed a couple wins at 5 Mile Point earlier in the season, with him.

An early race restart would see Liberty, NY’s Houghtaling power by Kuser and hold the lead for several circuits. Kuser would take the spot back as Houghtaling would drift high in turn one and Romulus, NY’s Jon Kuleszo would begin to make his presence felt slipping under the #53 and setting his sights on Kuser.

Pit notes….a strong Pennsylvania presence with a good half dozen Blast From The Past Club cars making the tow north…all features ran the missing man formation in honor of the late John Stanley who past away earlier in the week…Father & Son duo of Frank and Kyle Hoard making their first appearance ever with the series…Boyertown, PA’s Andy Cassel with a tough debut, getting out late for his heat and having several handling issues sending him tail during the feature…Mike Cole making his first appearance a successful one claiming the Nostalgia class…new starter Thomas Hodge looked quite capable on the flagstand in his first DMNT event…Chip Gauthier will have a bounty placed on his head for the next event after claiming now 4 in a row…special thanks to Thomas Coughlin for running the series in the US with only half a crew…shout out to Bernadette Phillips for coordinating the PA cars and a big thank you to the entire group for making the haul….Mike Cole, Chip Gauthier, Mike Houghtaling and Duane Hiller were the heat winners. 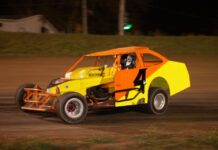