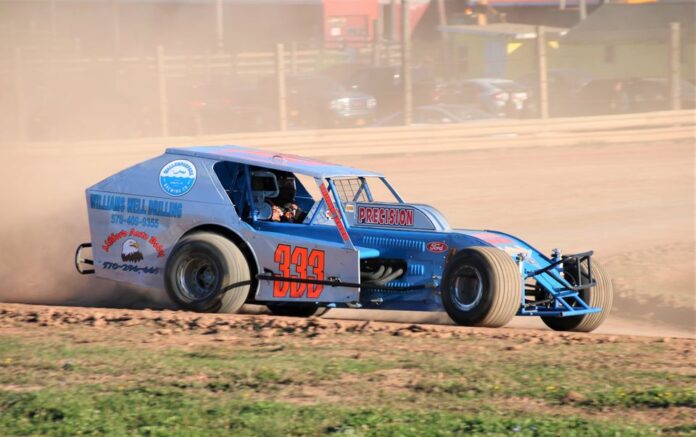 LIBERTY, NY – Mike “The Hammer” Houghtaling has his sights set on the Dirt Modified Nostalgia Tour’s Unlimited division Championship this season. He will be wheeling the Bob Schmidt owned, Ford powered #333 and on occasion his own car in the DMNT Modified class.
“Bob is both a mentor and a father figure to me” explains the 54 year old auto mechanic. “We are really looking forward to running this new Unlimited class, we will be looking for the Championship”
Houghtaling’s career started at the tender age of four years when he began racing snowmobiles which continued until he was around ten years old.
When he was fourteen he made the move into cars during the 1981 season in the six cylinder division at Accord Speedway. He would finish third in points that year then go on to win Championships in 1982 through 1984.
1984 would also see Houghtaling move into the street stock division where he would reel off 11 straight wins until the car was destroyed in a bad wreck.
The racing would be sporadic for the next several years, in 2004 Mike would pick up 4 cylinder racing and Sportsman Modified at Accord. He would place 10th overall in Sportsman points and reel off four cylinder Championships in ’04, ’06 and ’08.
He would then return to Sportsman in 2010 and would run several years before personal issues would once again sideline him. It was then he discovered vintage racing. “Vintage racing allowed me to continue doing what I love and it didn’t cost a fortune” adds Houghtaling. The success was instantaneous, with many feature wins and three Championships over the past several years.
“The Hammer” will be looking to add to his trophy case in 2021.
For more on the DMNT: https://www.dirtmodifiednostalgiatour.com/
Or visit us on Facebook: https://www.facebook.com/dirtmodifiednostalgiatour