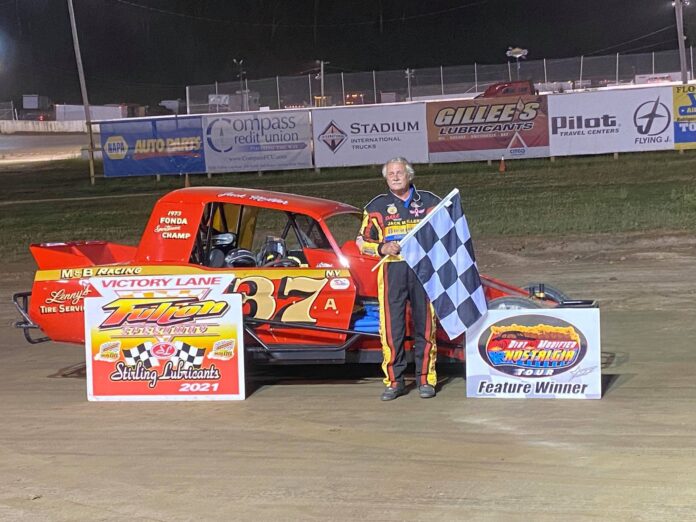 FULTON, NY – The Dirt Modified Nostalgia Tour returned to the Fulton Speedway after a year’s layoff due to the Covid 19 pandemic this past Saturday night. The night would see a couple of fresh faces in victory lane.

Schoharie, NY’s Jack Miller would make his first DMNT appearance a successful one as he would lead the 12 lap Unlimited class feature start to finish putting an end to Mike Houghtaling’s winning streak. The Liberty, NY native would give chase but would not be able to reel the Ford powered Mustang bodied machine in. John West of Constantia, NY in his 2 barrel Modified entry would complete the podium.

In the combined Modified/Nostalgia class 12 lap feature it was John West grabbing his first ever DMNT win after wrestling the lead away from Mike Houghtaling several laps in. Ed Lawrence of Seneca Falls, NY returned to DMNT action to complete the podium.

Brad Litzenberger of Romulus, NY would get the Nostalgia class honors.

Pit Notes…mechanical failures plagued the series this evening…Ron Root engine failure…Alan McDonald suspension damage….George Palmer suspension….Mike Cole steering…Tom Belewich getting a car to the track driven by Frank Brown…Litzenberger with three feature wins on the season…the series will be back in action this coming Saturday at the 5 Mile Point Speedway.