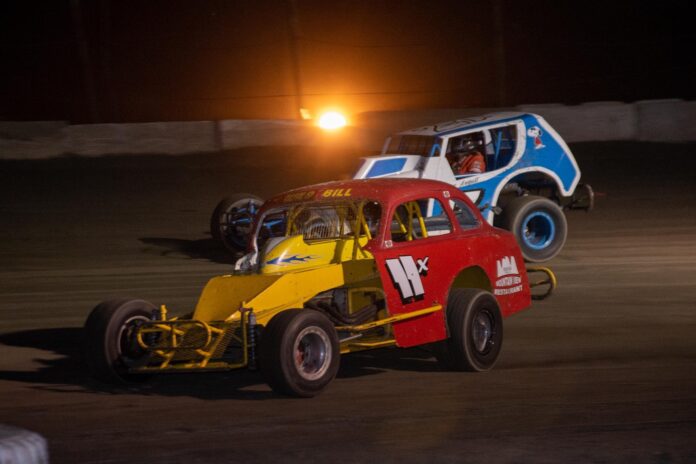 CENTER LISLE, NY – The Dirt Modified Nostalgia Tour made its second appearance at Thunder Mountain Speedway here this past Saturday night and once again Mike Houghtaling and Bill Leonard would take checkers in the Unlimited and Modified classes respectively. Roger Williams would claim his first ever DMNT Nostalgia class feature.

In the first 15 lap affair Houghtaling would waste no time blasting off from heat win but Bill Leonard would hang with the points leader and pressure throughout. With only a handful of laps remaining lapped traffic would come into play and Leonard would capitalize getting by the Hammer to claim his third win of the season, two of which came at Thunder Mountain. Houghtaling would have to settle for second with Steve Longo completing the podium.

The fifteen lap Unlimited feature would once again see Houghtaling blast off into the lead but this time behind the wheel of the Bob Schmdt 333 entry. Behind him was a great battle for second through sixth between George Valenti, Joe August, Bill Leonard, Duane Hiller and Kevin Kuser.

A late race caution for debris would see more than half the field retire for mechanical issues, broken bars, flat tires and other woes would see Houghtaling, Leonard and Tom Church run a three lap shootout with Houghtaling prevailing.

The series heads to Southern Ontario Motor Speedway north of the border this coming Saturday.