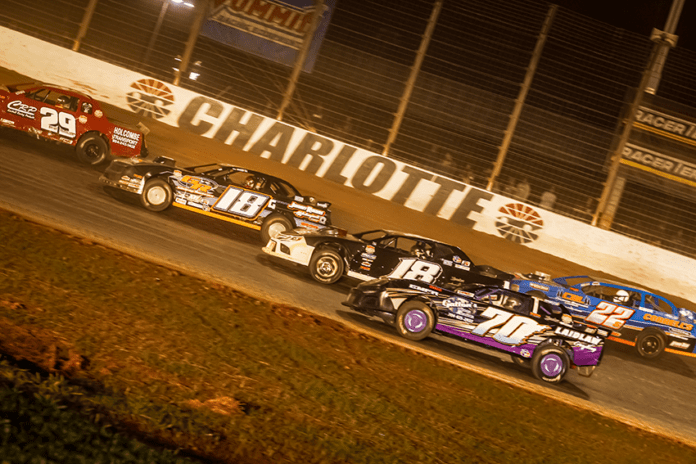 The Drydene Double Down Challenge is a new feature for this year’s headline DIRTcar Racing event, the Drydene World Short Track Championship, taking place at The Dirt Track at Charlotte Motor Speedway, October 29-31. This brand-new, Front Row Challenge-like element will add an additional spark of excitement to each race for the fans watching live on DIRTVision and a chance for the drivers to double their winnings on the big stage.

Before each Feature for the seven competing divisions on Saturday, both the polesitter and outside polesitter will be given the option to drop to the tail of the field and take a shot at the win, doubling the amount written on their check in Victory Lane. Both drivers in each race will be presented with the option, but do not have to accept the challenge.

Any of the drivers who accept the Drydene Double Down Challenge will also be eligible for the Hard Charger award for each division ($200 Drydene product certificate).

The Drydene World Short Track Championship features a number of awards, raffles, and special features for participating drivers in addition to the Drydene Double Down Challenge.

Several special awards will be presented to drivers in each division, including:

All competitors will receive a Drydene gift bag upon arrival to registration at the designated redemption area, filled with items from event sponsors including Drydene, Summit Racing Equipment, VP Racing Fuels, COMP Cams, Hoosier Racing Tire and others in appreciation of their attendance. Each competitor will also be receiving the traditional “WE RACED AT CHARLOTTE” bumper sticker as part of the gift bag.

To keep everyone safe and conform to CDC health guidelines during the event, Drydene will also be providing face masks (which must be worn by all drivers and crew members outside of their designated pit spaces) and individual hand sanitizer bottles. In addition, Drydene-branded t-shirts for all teams (up to five [5] per team) will be redeemable at the Drydene tent in the lower pit area with a completed form.