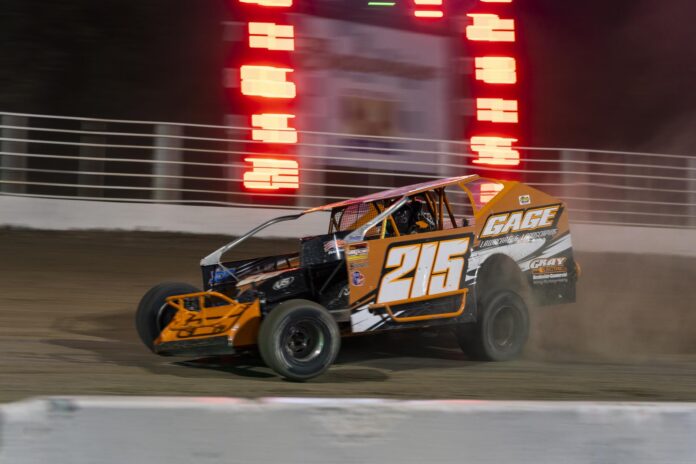 CONCORD, NC – The NGK NTK World Finals is the ultimate finale for the Super DIRTcar Series featuring two $10,000-to-win, 40-lap knockdown, drag out clashes on the crimson clay of The Dirt Track at Charlotte (Nov. 4-6). DIRTcar Big Block Modified rookie Adam Pierson has been creeping into the podium picture on the Super DIRTcar Series trail this year and now he’s ready for the bright lights of the biggest stage in dirt racing.

Pierson, from Fairlee, VT, has driven his way into a Big Block ride with pure heart, determination, and an ability to assemble great people around him. His rise was punctuated by his first career Big Block win in a Hoosier Racing Tire Weekly Championship race at Albany-Saratoga Speedway this year over a field including Marc Johnson, Kenny Tremont Jr., Jack Lehner, and more.

It’s been a long and winding road for Pierson whose family is steeped in racing heritage.

“Racing has been in the Pierson family for 50 years,” Pierson said. “My grandfather, great uncle, my uncles raced, so it’s in the blood. I’ve been around racing since I was born. My dad started racing in 1980 or ‘81. I was born in ‘84 and started going with him to race car shops when I was seven or six years old.”

While funding is good, Pierson’s Gage Lawncare & Landscaping #215 is still a small team with Pierson as the primary builder. That’s DYI ability is something his father instilled in him at an early age.

“I started helping on the car then because my dad told me I’ll never get into a race car unless I started working on them first,” Pierson said. “When I was 13, I started really helping him and was on the crew. Then in 2000, my dad built a car for me. It was a Sportsman Coupe at Bear Ridge Speedway. That’s been my home track. I haven’t been there for three years now. I started going to Airborne and then running 358s and Big Blocks.”

Following the DIRTcar Northeast ladder has paid off because Pierson is a rare NGK NTK World Finals rookie with prior experience racing at The Dirt Track at Charlotte with three starts in his DIRTcar Sportsman Modified at the Drydene World Short Track Championship.

“I’ve been down there at Charlotte three times racing for Gage,” Pierson said. “It’s a cool show [Drydene World Short Track Championship]. He had two Hig-Fab cars. It was 2016-2018. It’s a track that is only raced at once a year for us and actually having some laps there so that should help. Sometimes you are on the bottom or up on the wall. You gotta keep a Sportsman wound up but with a Big Block you can go where you need to and horsepower down the straightaways.”

One of Pierson’s most impressive feats in 2021 has been his ability to travel and adapt to new race tracks. But Pierson’s whole career has geared him for those types of challenges. His flexibility didn’t come out of racing a modified but a midget.

“Learning how to adapt to new tracks started with me in the Midget racing,” Pierson said. “The late Frank Manafort got me on the track of going to different races and running different series. He brought me to North Carolina, Pennsylvania, and different places. That kinda jumped up my game a bit. I decided I wanted to do that with the Modifieds. So I started taking the Sportsman to Albany-Saratoga plus end-of-year stuff and Super DIRT Week.”

It was a seven-hour haul for Pierson to get to The Big ‘R’ in Niagara County, Ransomville Speedway, with the Super DIRTcar Series. Although he only finished 22nd, Pierson was particularly proud of his team’s efforts.

“We went to Ransomville,” Pierson said. “We made the show [40 cars entered]. It was lucky and great. We ran in the top 15 most of the night. So running different race tracks makes you better. But you gotta have a team that knows what they are doing with shocks and tires. You gotta have everything clicking for it to all work. It’s made me better traveling on the Series. You learn a lot with these guys. You learn what to do and what not to do.”

Pierson had a strong seventh-place finish recently against the stars of the Super DIRTcar Series at Brewerton Speedway in the Demon 100. He’ll look to do that again, and better at the NGK NTK World Finals.

Get your tickets for the NGK NTK World Finals HERE and find out how Adam Pierson fairs against the best Big Block Modified drivers in the world at The Dirt Track at Charlotte Thursday through Saturday, November, 4-6.

Can’t make it? Watch all the action live on DIRTVision presented by Drydene.