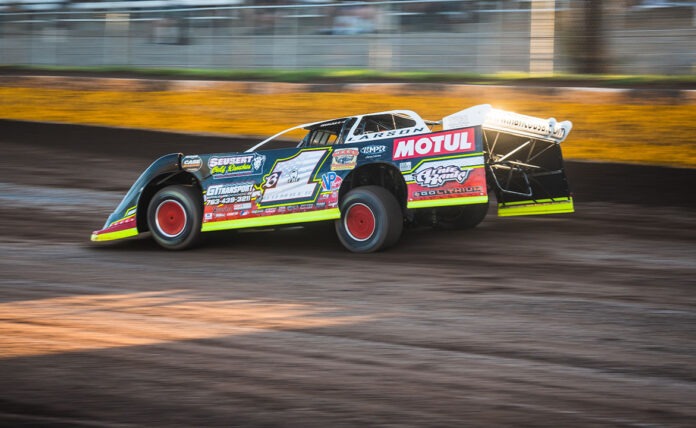 CONCORD, NC –Basketball legend Michael Jordan once said, “Obstacles don’t have to stop you. If you run into a wall, don’t turn around and give up. Figure out how to climb it, go through it, or work around it.”

While Brent Larson has faced multiple obstacles since joining the World of Outlaws CASE Construction Equipment Late Model Series tour in 2018, he’s never turned around. Never given up. And continues to fight.

Further proof of that will be on display during the World of Outlaws World Finals at The Dirt Track at Charlotte, where the Lake Elmo, MN will officially clinch his fifth-place finish in championship points – the best finish of his World of Outlaws career.

He’s also improved his average finish by more than four positions from 2021.

Larson’s growth is something he said comes from the experience of battling some of the best dirt Late Model drivers in the country on a nightly basis.

“Last year, we got the most improved driver [award], and this year we’re a little better yet. I think it’s just a pattern of continual growth.”

Any driver who runs a national touring schedule will likely face adversity throughout the season.

This year was no different for Larson, and he dealt with new crew members and his wife Melanie’s shoulder injury, who’s also his tire specialist.

“Even when [Melanie] wasn’t physically at the track or was out with her shoulder injury, we still worked together a lot,” Larson said. “I think a lot of my program, in general, has just been overcoming adversity and struggles and challenges.”

Those new challenges came on top of old obstacles like travel. Larson’s home, just outside St. Paul, MN, is further north than any other full-time Series driver. However, it’s only part of how far his team has come in the past few years and how they face that adversity.

“Just being located where I am physically presents a challenge as far as adversity and lack of experience across the different parts of the country,” Larson said. “But I think we’ve learned to overcome adversity largely over the last two or three years, that when we face adversity now, it’s not that big of a deal.”

Larson said he enjoyed that experience but is frustrated that he couldn’t grab the checkered flag.

“It’s both rewarding and exciting to be that close, but it’s also frustrating being that close and not being able to close the deal,” Larson said. “It’s one of those things I look back on a lot and think what I could have done different to win that race. I guess you just hope that thought and that experience allows you to close the deal off the next time you get into that situation.”

The final stop in Larson’s fifth year on tour is The Dirt Track at Charlotte for the World of Outlaws World Finals—a place where Larson has struggled at times.

Despite those results, he said he believes he’s capable of winning on one of the biggest stages in dirt racing.

“I haven’t been real great at Charlotte overall,” Larson said. “I’ve showed some speed at times, but I haven’t really put together a great night altogether there. I think I’m capable of it. It’d be a shocker to a lot of people, including me, to pull off my first win there.

“But I look forward to being closer to the front and maybe having a chance. Charlotte’s kind of a crapshoot for everybody. Every year you see someone run well there you don’t expect to, and I’m doing everything I can to be one of those guys this year.”

No matter the World of Outlaws World Finals result, Larson will cap off a successful year with the best showing of his career. It shows that no matter the obstacle he faces, the driver from the “Land of 10,000 Lakes” has shown how to climb, work around, or go through any wall he runs into.