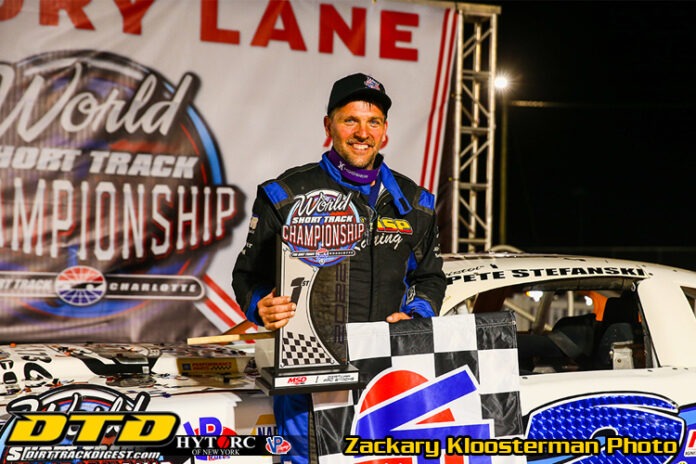 However, in the opening stage of the 20-lap race, it looked as though he had a full season with it under his belt. Stefanski went from fifth to third in the opening lap. Third to second by Lap 4, and then took the lead on Lap 9.

From there, he ran away with the victory – his first at the World Short Track Championship in his fifth Feature start.

While he was confident in his car, he didn’t expect to move forward at that rate.

“I thought if I was patient enough, we would be able to get there and run with those guys,” Stefanski said. “I kept getting my nose underneath [Shawn Perez Sr.] there and I didn’t think I was going to clear him and he just kind of bobbled the corner and I said, ‘I just have to drive it in all the way and do a little bit of a slide job on him.’ And it worked through (Turns) three and four.”

Shawn Perez Sr. started on the pole for the Feature, after the entire field drew for their starting positions. From there, he jumped ahead of the field on the initial start, leaving a three-way battle for second behind him.

Johnny Rivers Jr. found himself under attack from Stefanski and Denis Gauvreau in the opening laps and eventually lost the battle to both drivers by Lap 7, falling to fourth – and eventually fading further until he landed in eighth at the end of the race.

Once Stefanski and Gauvreau found their way into the top-three, it became a three-way battle for the lead. Running low, Stefanski worked his way under Perez, creating a side-by-side race for the lead, which allowed Gauvreau join the duel.

When Perez bobbled through Turns 3 and 4, Stefanski had a clean run around the bottom and launched to the lead down the front stretch. Gauvreau also worked his way by Perez for second.

“It was nice to be three-wide, no contact, because the track is just great top to bottom,” Stefanski said. “That’s what made the racing so good.”

The race looked to be in Stefanski’s control until a caution on Lap 14 for a car stopped in Turn 2. When the race resumed, Gauvreau kept the pressure on the New Yorker, staying close enough for Stefanski to hear he was within striking distance.

However, that wasn’t enough to rattle the four-time DIRTcar Pro Stock champion. Stefanski maintained a car-length lead and capped off the opening night of the seventh annual World Short Track Championship with his first event win – which now locks him into Saturday’s main show.

“It’s huge for me,” Stefanski said. “I’ve only been in the car five times this year with the new setup and coils and everything. So, to be as close as we’ve been in the four races we’ve been in and to come here and win against the guys that we ran against here, I’m pretty proud of myself.”

Gauvreau settled for second and along with Stefanski’s impressive drive, Marc Lalonde had the best climb of the race, charging from 20th to finish third.

UP NEXT: The MSD DIRTcar Pro Stocks will run their Heat Races and Last Chance Showdowns Friday (Oct. 28) at The Dirt Track at Charlotte for the second night of the seventh annual World Short Track Championship before Saturday’s main event.