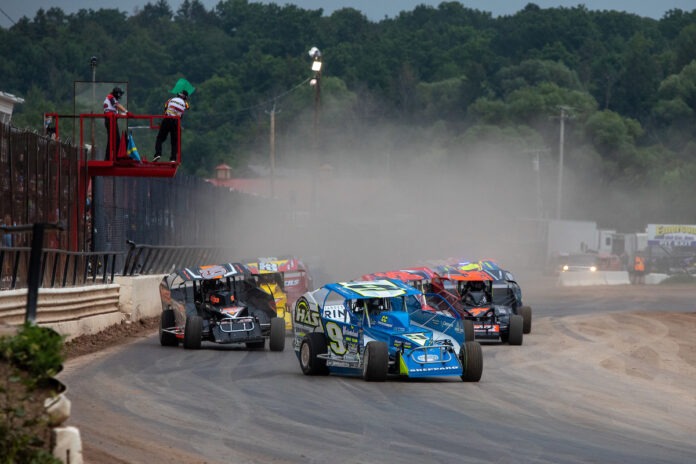 CONCORD, NC – The Super DIRTcar Series will join their World of Outlaws brethren for the World of Outlaws World Finals at The Dirt Track at Charlotte, Nov. 2-5, with its own points battles to follow.

While Matt Sheppard has mathematically locked his historic ninth Series title, Mat Williamson and Jimmy Phelps are only separated by 30 points for second and fourth through seventh are separated by 28 points, leaving room for a potential reshuffling by the season’s end.

BEST-OF-THE-BEST: Eight-time and defending Series champion Matt Sheppard is poised to win his ninth title, further placing him as one of the Series’ winningest title contenders along with Brett Hearn.

With a six-win regular season and his third career Billy Whittaker Cars 200 victory during 50th Running of NAPA Super DIRT Week, the Waterloo, NY driver will look to finish off his expectional season in the same dominating fashion he has shown since May.

RIGHT BEHIND: After a second-place finish during the Billy Whittaker Cars 200 at Oswego, Mat Williamson currently sits second in points behind leader Matt Sheppard. Though a run for the championship is out of reach for the St. Catharines, ON driver due to Sheppard’s commanding lead, Williamson will aim to secure a second career World of Outlaws World Finals Feature win to remain in his current position.

Though Williamson hit a dry spell during the middle of the regular season, he was able to notch a win at his home track Ransomville Speedway to remain in contention.

READY TO STRIKE: Jimmy Phelps, one half of the Heinke-Baldwin Racing duo competing on the Series, recorded a consistent season with three top-five finishes and 10 top-10 finishes. With two career Feature wins at The Dirt Track at Charlotte, Phelps comes into the event with experience under his belt.

After finishing just outside of the podium during the Billy Whittaker Cars 200 at Oswego, the “Baldwinsville Bandit” sits in third place in the point standings, 30 points back from Mat Williamson in second. With three races at the World of Outlaws World Finals this year, Phelps will try to take advantage of the extra and continue his climb up the championship ladder.

ROOKIE TALENT: Leading Rookie of the Year candidate Marc Johnson is coming off a standout performance at the Billy Whittaker Cars 200 at Oswego. Though he did not secure a podium finish, the Guilderland, NY driver led 38 of the 200 laps and exhibited high caliber potential.

Currently fourth in points, “The Dark Knight” will aim for his first career World of Outlaws World Finals victory – and first Series win – while also trying to score a podium finish in points. He’s currently 51 points behind Jimmy Phelps.

NON-SERIES COMPETITORS: Making the trip down south will be a hard-hitting list of non-Series competitors looking to take home some hardware. Brett Hearn, Tim Fuller, Justin Haers, Demetrios Drellos, and Alex Yankowski among others will be looking to execute their best performances over the three-day event for those in attendance to close out the season in the most exciting way possible.

Last year at World Finals was one for the ages – literally. At the time, 17-year-old, Alex Yankowski won the opening night at World Finals in only his second career Super DIRTcar Series start. Then, the next night 63-year-old Brett Hearn won his 450th DIRTcar-sanctioned race and 920th Feature.