CONCORD, NC – The Dirt Track at Charlotte was quite cruel to Logan Schuchart and Shark Racing in 2021, but she’s doing her best to mend that relationship and it started with Wednesday’s win at the World Finals. 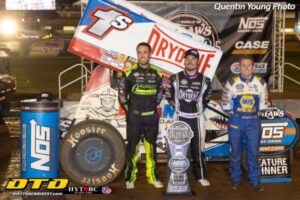 After being stripped of not, but two victories on back-to-back nights within the last 10 laps last year, Schuchart and the DuraMAX Oil, Drydene Performance Products #1S team returned to the Concord, NC 4/10-mile oval this week knowing that they were owed redemption, and that they found.

Combining a healthy mixture of speed and fortune, the Hanover, PA native put himself in the right position at the right time to capitalize as Carson Macedo’s nozzle line flipped the script and sent Schuchart out on the joyful side of this World of Outlaws NOS Energy Drink Sprint Car Series Feature.

The Jason Johnson Racing #41 had been dominant all night long, sitting only two laps shy of a “Perfect Night” at America’s Home for Racing, but lady luck intervened and changed it all during the final restart. While Macedo slipped to seven cylinders and fell short on power, Schuchart stood up in the seat and stormed by to lead the final two laps in a chaotic ending to the $15,000-to-win Feature.

It is what it is, though, and Schuchart gladly accepted his fifth win of 2022 with The Greatest Show on Dirt anyway that it came to him. Instead of sulking in the agony of defeat like last year, this time he enjoyed the thrill of victory, and has already set his sights on hopeful back-to-back wins when the Series returns to racing at Charlotte on Friday.

“After last year, this place owed us one,” Schuchart said on his perfect timing. “We fell out leading both races that I think we would’ve dominated, so we came back with the attitude that we deserved this and it paid off. This Drydene, DuraMAX #1S is just so good here and I really don’t know why. For whatever reason, no matter what setup we throw at this thing, we can always roll so well. It took a little bit of luck, but hey, that’s part of the game. I honestly thing tonight was the best I’ve ever felt here.”

On the losing side of Schuchart’s stolen triumph was Lemoore, CA’s Carson Macedo, who was less than a mile away from earning his first-career win at The Dirt Track at Charlotte when the universe took matters into its own hands. Dropping power on the final restart, Macedo’s sudden loss ended what would’ve been the fifth “perfect night” this season after he set My Place Hotels QuickTime, won his NOS Energy Drink Heat Race, topped the DIRTVision Fast Pass Dash, and nearly went flag-to-flag in the World Finals Feature.

“We had a car to win and it was a really great night right up until the end,” Macedo noted. “It was just a freak deal. There’s a fitting that hooks to the nozzle, and at the end of that the rubber line broke right off. I was basically running on seven cylinders and trying to baby it so we didn’t blow the engine. It’s unfortunate because we really should’ve won, but it is what it is. I’m thankful we’ve got such a fast race car and I know we can come back to compete for wins on Friday and Saturday.”

Settling for the third-place position, his 23rd podium of the season, was points leader Brad Sweet in the NAPA Auto Parts #49. The Big Cat did what needed to be done during a heated title fight, and now heads into the final two shows with a little bit more of a cushion as he tries to seal the deal on his fourth consecutive World of Outlaws NOS Energy Drink Sprint Car Series championship.

“We didn’t change much after the Dash, but it didn’t just take off as well in the Feature,” Sweet, who passed six cars in six laps during the Dash, said after falling from the outside pole. “I think we’re all in such small windows with these race cars that you’re decision making needs to be spot on and we were just a tick off tonight. It was a good night to start the week and build upon. We did a great job executing with the situation we’re in.”

After battling for third on the final restart against Sweet, David Gravel slipped back to finish sixth in the Big Game Motorsports #2. With two races remaining, he now trails the Kasey Kahne Racing #49 by 22-points in hopes of stealing his first-career World of Outlaws NOS Energy Drink Sprint Car Series championship.

Rounding out the top-10 was “The Jonestown Jet” Brock Zearfoss with a stellar 15th-to-seventh run, Lance Dewease with a remarkable 29th-to-8th effort in the Kreitz Racing #69K, Sheldon Haudenschild with a ninth-place finish as he overtakes fourth in the standings, and Parker Price-Miller in 10th during his return to racing in the Swindell SpeedLab #39.

A fourth triumph at The Dirt Track at Charlotte puts the Concord, NC 4/10-mile oval into a tie with Minnesota’s Jackson Motorplex as the winningest track of Schuchart’s World of Outlaws career.

Carson Macedo extended his reign as the best qualifier of 2022, taking his 11th QuickTime Award of the season and the 19th of his World of Outlaws career. The Jason Johnson Racing #41 circled The Dirt Track at Charlotte in 12.678 seconds to top all 52 cars in My Place Hotels Qualifying.

Macedo mastered the DIRTVision Fast Pass Dash to earn his Series-best seventh pole position, and was well on his way to the fifth perfect night of 2022 when a nozzle line took his win away.

Brian Brown, of Grain Valley, MO, officially earned the KSE Hard Charger Award with a 24th-to-12th run, but a pair of PA Posse stars certainly made up the most ground on Wednesday. Lance Dewease drove from 29th-to-8th after a work area trip derailed his strong starting position, and Brent Marks advanced +24 positions across his Non-Qualifier, Heat Race, Last Chance Showdown, and Feature after missing his Qualifying attempt.

UP NEXT (Fri-Sat) – The World of Outlaws NOS Energy Drink Sprint Car Series will host a “Fan Fest” from 2-4pm on Thursday, but takes the night off from racing. The penultimate and then season finale shows will run back-to-back on Friday and Saturday as the World Finals conclude at The Dirt Track at Charlotte. Fans can BUY TICKETS HERE, or watch every lap LIVE on DIRTVision.