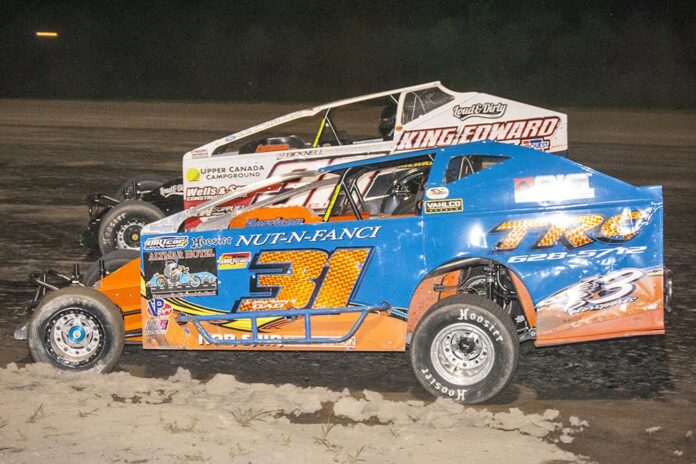 Another name will be added on Thursday, Aug. 19, at St. Lawrence Radiology night at Mohawk Int’l Raceway.

“It’s been real tough to get the 358 Series off the ground in 2020 and also this year with COVID and border restrictions. While there still many hurdles to have teams to cross the border we needed to have the Series this year with most tracks running under normal circumstances,” said NE Competition Director, “It’s still very tough for the 358 teams in Canada but with the bulk of the schedule in the US we needed to get it started as it’s getting late in the racing season.”

The overall DIRTcar 358 Modified Series champion will still include home track bonus points obtained after the Labor Day Weekend and along with Series event points added to the totals. A full point fund will be paid with the champion claiming a $6,000 top prize at the year-end awards banquet.

Michael Maresca, in the fan-favorite #7mm, has made his intentions to take the $4,000 payday known. Both the night of racing and Maresca’s car are sponsored by St. Lawrence Radiology.

Tim Fuller will pilot another St. Lawrence Radiology-sponsored car as well. The driver of the #19 has reached Victory Lane at Mohawk in 358 Series competition three times in his career. He’s been on a hot streak at Can-Am Speedway in his 358 so race fans will need to take note of his starting position for the 75-lap Feature.

A pair of full-time Super DIRTcar Series stars are planning to tackle Mohawk. Erick Rudolph, from Ransomville, NY, will pilot his #25R against the rest of the best DIRTcar 358 Modified drivers. Rudolph does not have a Series win at Mohawk but he is a three-time and defending 358 Modified Series champion.

Mike Mahaney has turned into a top line Super DIRTcar Series Big Block driver. He’ll put that experience to the #35 Adirondack Auto 358 to take on the North Country’s best for the $4,000 check.

Lance Willix has been battling at the top of the DIRTcar 358 Modified Hoosier Racing Tire Weekly Championship standings. Willix is hungry for more wins to push him over the top in those standings where he is battling Erick Rudolph, Mat Williamson, Billy Dunn, and more.

Another top driver set for Mohawk is Jordan McCreadie. A rookie on the Super DIRTcar Series this year, the second generation driver is near the top of the points at both Can-Am and Thunder Mountain. He will be a favorite at the first clash in Akwesasne, NY.

Also on the card is the first race of the season for the DIRTcar Sportsman Modified Series North Region. With successful starts to the East, Central, and West regions already underway, the North Region is sure to bring the excitement to the North Country.