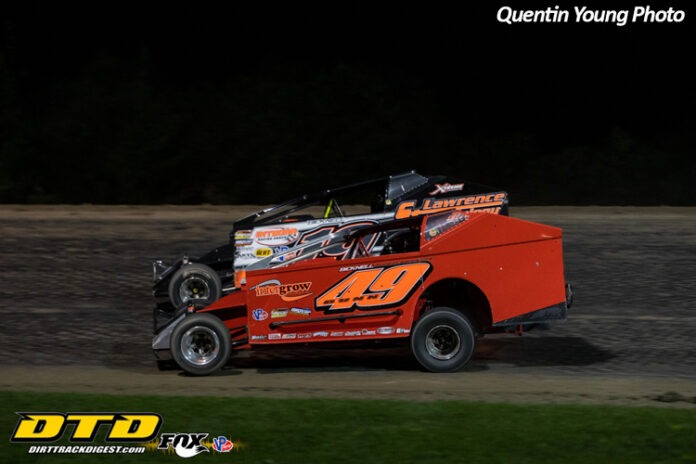 AKWESASNE, NY – Billy Dunn, in his rocket red #49, found a way through the chaotic final laps of the $4,000-to-win, 75-lap DIRTcar 358 Modified Series thriller to win at Mohawk International Raceway. The Watertown, NY driver made a last-lap pass on fellow Watertown native and rival Tim Fuller after the leader Mike Mahaney broke and pulled off with just two laps to go.

Erick Rudolph drove up from his unlucky redraw spot in position number twelve to capture the final step on the podium. After suffering damage to his motor in Hoosier Racing Tire Weekly Championship racing at Ransomville Speedway last Friday, Rudolph hooked up with the Junior Welling operation to field a Troyer chassis for the event.

Preston Forbes pulled the number one spot during the top 12 redraw. Forbes looked strong and lead the way until lap 22 when Billy Dunn winged around the top groove and into the lead. From there Dunn was determined to leave the rest of the field behind. At one point the #49 split a pair of lapped cars down the backstretch.

Dunn lead until lap 40 when the field restarted and Tim Fuller got the advantage.

“I thought right after the Heat Race that I had a really good car,” Dunn noted. “I knew I had a good car to stay up front with but I wasn’t good on restarts. It took me until halfway down the straightaway to get it cleared out. I fired before him [Fuller] and he just plain beat me to the front. Clean air here is everything.”

While Dunn and Fuller battled it out, Mike Mahaney was reeling them in using the bottom groove of the racetrack. On lap 51 Mahaney made the pass for the lead in Turns Three and Four.

With five laps to go, Mahaney began to show smoke from the right rear. Meanwhile, Tim Fuller and Billy Dunn were cutting in and out of lapped traffic battling each other just like they do every week at Can-Am Speedway.

“Mahaney could run the bottom better than anyone,” said Dunn. “He might have found some speed down there before anyone else. I tried to follow his line on the bottom and I thought I was faster than Fuller. I saw Mahaney get the hole with four or five laps to go. I assume that’s what broke him. He slowed drastically and I had to avoid him to keep from slowing down and giving up time to Fuller.”

Mahaney maintained the lead but on lap 73, the entire right rear of the car seemed to collapse with tire smoke billowing out. The #35 Adirondack Auto Big Block limped off the backstretch and into the pits while Dunn and Fuller raced side-by-side for the lead.

It was then that Dunn pulled the trigger and dove to the bottom under Fuller to take the top spot for the $4,000 win in the first points-paying DIRTcar 358 Modified Series race since 2019.

An understandably disappointed Tim Fuller finished second. The black and orange St. Lawrence Radiology #19 started in the second row and battled with Dunn, polesitter Forbes, and Mahaney for all 75 laps. He had his 358 slinging around the top side but unfortunately, he couldn’t get the car to the bottom when he needed to.

“I couldn’t run the bottom,” Fuller said.”I tried it and I felt slow so I kept running the middle and top. With 2 laps to go I was leading but there was so much going on that I wasn’t sure what was happening behind me. Dunn found a lane on the bottom and that was it.”

“I was a second-place car because I ran second,” noted Fuller. “Mahaney had a pretty good car. I think I was equal to him in the middle but I was missing the bottom where everyone was running through it. It was set up tight. I like to run the middle to the top here but it was just too snug to run the bottom.”

Erick Rudolph, from Ransomville, NY, finished third. This was his first outing in Junior Welling’s Troyer chassis, a chassis Rudolph had not raced in 4-5 years by his recollection.

“The car came with a baseline setup and we made some fine tunings for the Feature,” said Rudolph. “ I am really happy with how the car performed. Overall it was really good.”

The #25 had a lot of strong cars to get around before finding the podium including Rocky Warner, Dave Marcuccilli, and Ronnie Davis III.

“It seemed like on the restarts I was able to pick up a spot or two,” Rudolph said. “We were working the bottom really good but if we had to we could use the top. We had a really maneuverable car. I am not sure when but I am looking forward to getting back in it.”

Driver Cameron Black suffered a mechanical issue in the race but his finishing position of 22nd was randomly chosen for one free Hoosier Racing Tire.

The next DIRTcar 358 Modified Series race is on Friday, September 10 at Can-Am Speedway.