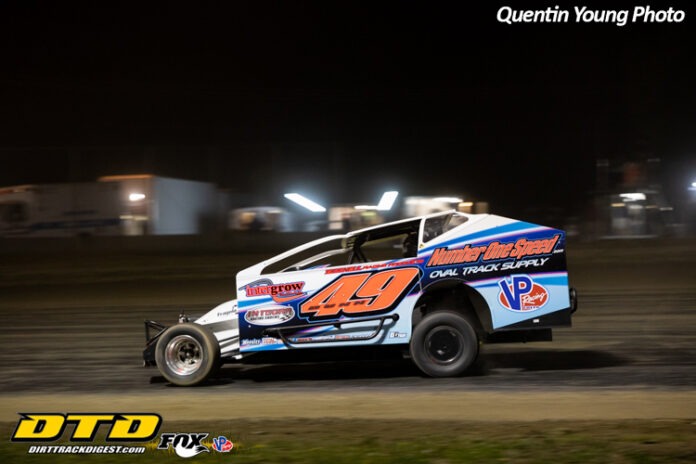 LAFARGEVILLE, NY – The Can-Am Speedway grandstands shook with the roar of 31 DIRTcar 358 Modifieds battling out for 50 laps in the second round of Series racing this year. Once again, Billy Dunn came out on top.

Dunn’s previous Series win at Mohawk Int’l Raceway came as a result of a little luck, a lot of hard work, and a clean battle with Tim Fuller. The #49 and #19 were once again duking it out at Can-Am.

First, Dunn tracked down early leader Michael Maresca and went on to survive late charges from Tim Fuller to win the $4,000 tour stop. The #7MM of Maresca rounded out the podium positions with a third-place finish.

“We brought out a new car which I wish we had brought out last weekend,” said Dunn in Victory Lane. “The car just felt really comfortable. Hats off to the track crew. We had heavy rains this week and cold temperatures but this was the best track we’ve had all year.”

With Fuller finishing second again, this writes another chapter in the on-track rivalry between Billy Dunn and the 2021 Can-Am Speedway track champion Tim Fuller.

“I knew Fuller was there and that he’d be wanting one back for giving up the win at Mohawk but he wasn’t getting one,” said Dunn of his battle with Fuller.