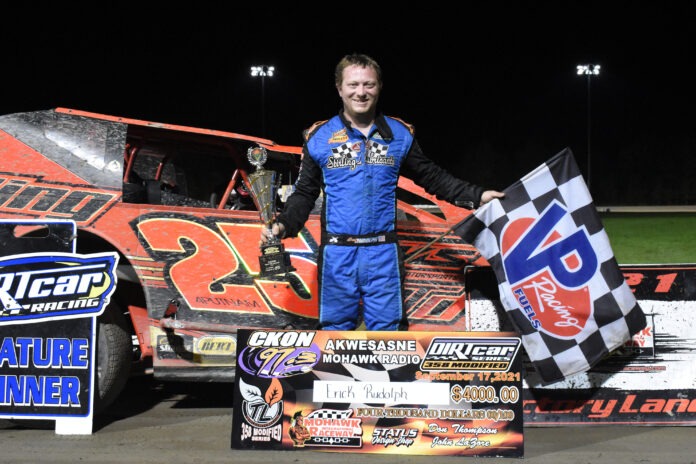 AKWESASNE, NY – Erick Rudolph, the three-time DIRTcar 358 Modified Series champion, finally broke through at Mohawk Int’l Raceway for his first Series win of 2021. Rudolph had to hold off the driver who won the first two Series races of the year Billy Dunn. Dunn finished second. Tim Fuller, Series points leader going into the race, fought his way up through the tough top half of the field to finish third.

Erick Rudolph, from Ransomville, NY, is an absolute ringer in the DIRTcar 358 Modified Series but he had the best of the best hounding him for 60 laps.

At the drop of the green flag, Can-Am Speedway promotor Ryan Bartlett shot out into the lead. Rudolph, who started third, was right there in his tire tracks. By lap 10 Bartlett, in the #93, caught up to the backend of the field. Just as Bartlett and Rudolph began managing lapped traffic, third-place Jackson Gil joined the battle at the front but on lap 13 the caution flew.

On the lap 16 restart, multiple cars jammed up in Turn 2 and the red flag was displayed due to the blocked racetrack. Once the race got back underway, the top three got into a rhythm and pulled away from the field.

But not from everyone.

At halfway, Billy Dunn reloaded and started making his moves to the front. At the same time, Ryan Bartlett was passed by Erick Rudolph as well as Jackson Gil who slotted in behind Rudolph.

By lap 35 Dunn had overtaken all challengers and made it to second with his eyes on the prize.

Concurrently, Tim Fuller started seventh and made smart moves to be there at the front when it mattered.

With nine laps remaining, Carey Terrance, in the #66X, suffered a mechanical failure and stopped on the backstretch. That would end up being the final restart and with six laps to go Dunn got alongside Rudolph in Turn 1. They drove hard side-by-side for the lead, but they never touched and Rudolph kept the advantage to win.