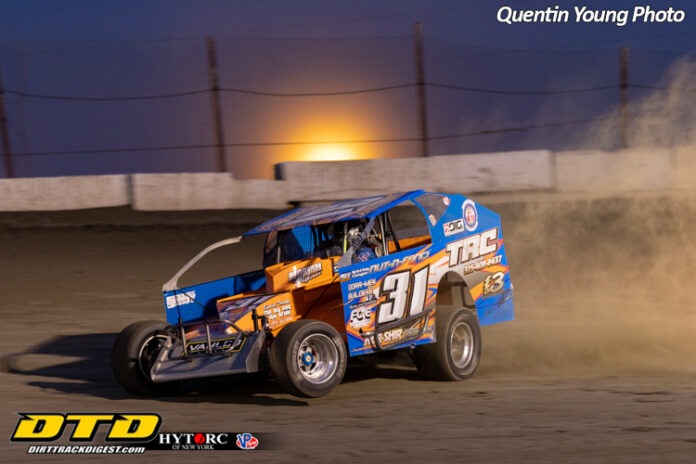 CENTER LISLE, NY – With Thunder Mountain Speedway hosting the second round in the DIRTcar 358 Modified Series championship, Lance Willix II is hoping for a home-field advantage.

Currently sitting second in Thunder Mountain track points for 358 Modifieds, Willix, of Theresa, NY, hopes his weekly experience at the track will give him the advantage he needs to compete with the invading field of stout competitors.

However, even with his successful run so far, he still sees room for improvement.

“Everybody says we’re having a good season but, in my eyes, we need to be better,” Willix said. “We need to be more consistent. I mean, all in all, yeah, we have three wins. We need to be doing a little bit better at our Friday night track here at Can-Am (Speedway). It’s been a decent season.”

Willix is second in points for the Hoosier Racing Tire Weekly Championship with his three victories this season and currently 13th in the DIRTcar 358 Modified Series standings after one race. Some of his inconsistency is trying to grasp the varying track conditions, he said.

“At Can-Am, it seems every week it’s something different for track condition,” he said. “You don’t know what to expect. But that comes with the territory and the weather. I think Thunder Mountain we’re pretty consistent down there. It’s just consistency. We need to be better when we first get there and better at the end of the night also.”

Along with the consistency of Thunder Mountain’s track conditions, Willix added the uniqueness of those conditions are what may give him an advantage to standout for the 358 Series race.

“It’s a hard surface to get a hold of,” he said. “The track actually picks up speed as the night goes on. It’s the only place I see do that. That’s something you don’t expect.

“The guys that run there weekly know what to expect. It’s a weird place. It’s a fun racing place. But it’s a different place to get a hold of.”

With the added competition being brought in for the Series race, Willix said it will be important to take care of his equipment early on. He knows drivers like Billy Decker, who won the opening Series race at Fulton Speedway, know how to not burn up their equipment early on, but still be fast, and then even faster by the end of the race.

He’s in the process of building a new car but said it won’t be ready until later this year. However, his plan is to have it ready in time for the 50th Running of NAPA Auto Parts Super DIRT Week at Oswego Speedway, Oct. 3-9.

The event is one he said they won’t miss. He finished eighth in the DIRTcar 358 Modified Salute to the Troops 150 last year – a career best run for him.

Making sure the new car was ready in time for Racing’s Biggest Party was no question.

“We ramp it up a little bit because it’s such a big race,” Willix said. “The caliber of cars you race against are second to none. You have to be on your A-game.”

Before getting to that point in the season, Willix and his team are focused on collecting more trophies and hoping the points will fall in their favor along the way.

“You always want to get more wins,” he said. “Once you get your wins you can be more consistent, and the point championships are going to come and stuff like that. We have to stay up on top of it and get more wins. I have to do a better job with homework in the garage, too. It’s easy to fall off that a little bit too in the shop. We have to do a little bit better there too.”

The DIRTcar 358 Modifieds, along with the DIRTcar Central Region Sportsman, will invade Thunder Mountain Speedway on Wednesday, Aug. 10.