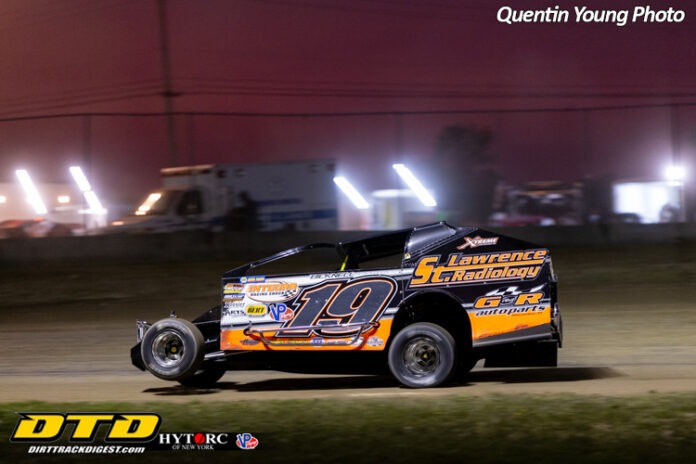 LAFARGEVILLE, NY – Tim Fuller held off Billy Dunn to score the DIRTcar 358-Modified Series win at Can-Am Speedway. Fuller reached the lead early in the event, then fought off Dunn’s advances in the latter laps.

Shaun Shaw spent some time out front at the start of the 60-lap feature, getting the best of Fuller on the initial jump. However, Fuller went to work, gaining momentum around the top and passing Shaw on lap 7. Shaw held steady in second until a lap 17 restart, where Dunn slipped by.

Rocky Warner picked off a few cars in the early laps, reaching third on lap 19 and pressuring Dunn thereafter. On lap 32, Warner rolled the bottom under Dunn to take second, with Dave Marcuccilli close behind. Dunn was prepared to fire back, building speed up high and getting back by Warner with 38 laps complete. A yellow on lap 44 allowed Dunn to catch up to Fuller, and Dunn didn’t let Fuller get away this time.

With Fuller running the bottom everywhere but turn two, the top was mostly Dunn’s to have. With ten laps left, Dunn pulled alongside Fuller down the frontstretch, but with Fuller running a slider line in turns one and two, Dunn couldn’t carry his momentum as needed and allowed Fuller to hang onto the lead. In the final circuits, Fuller put some lapped traffic between himself and Dunn, driving off to another Can-Am victory. Dunn came home second, with Ronne Davis III making a late charge to third. Warner held on for fourth, with Taylor Caprara completing the top five.

“I didn’t want to screw it up by drawing the pole,” Fuller noted. “I never draw the pole. Billy raced me good, and Rocky is a good racer, we raced side-by-side well. When you’re the leader, you’re never sure if you are in the right groove. Those guys would show me a tire and I’d get to thinking that’s the better groove, but then you lose sight of them. I got a lot of laps around here, and I know that the bottom has been so dominant in three and four all year, but I could float around in one and two. It was fun racing those guys and they got my juices flowing.”