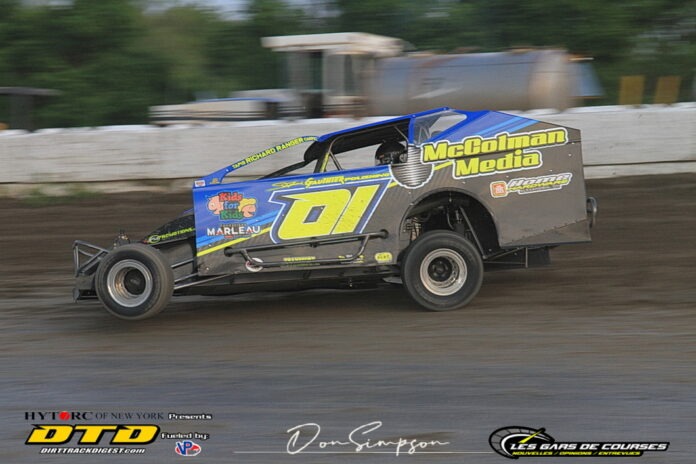 Raabe lined up fourth for the Feature and paced himself for most of the race while his competitors jockeyed for position.

Brian McDonald started on the pole and led the pack until Carrey Terrance made his way by Louis Jackson Jr. and McDonald after the first restart.

No stranger to the track, Terrance jumped out to a comfortable lead, several car lengths ahead of his competitors. Just as it seemed Terrance couldn’t be challenged, Raabe used a late race charge to make things interesting.

His car came alive three-quarters of the race in, picking off his competitors one by one with slick maneuvering in lapped traffic. After passing two cars on Lap 49 to put him in second place, he set his sights on the leader.

“I wasn’t really saving much,” Raabe said. “We were just really bad early on there. I thought we were in trouble. We slid back like four spots. It was really slippery out there. Our car was really good on the bottom. We just made it happen.”

He passed Carrey Terrance on Lap 55 and went on to claim the victory.

Second place finisher Louis Jackson Jr. held the lead during the first half of the race, but was passed by Carrey Terrance when he has to ease up due to his car becoming too hot.

Jackson Jr. finished second, unable to contend for the victory when his car started overheating.

“I was just trying to pace myself,” Jackson Jr. said. “I noticed that my car was getting hot. So, I had to ease up on it a little bit. That was at like Lap 30. You don’t want to kill it.”