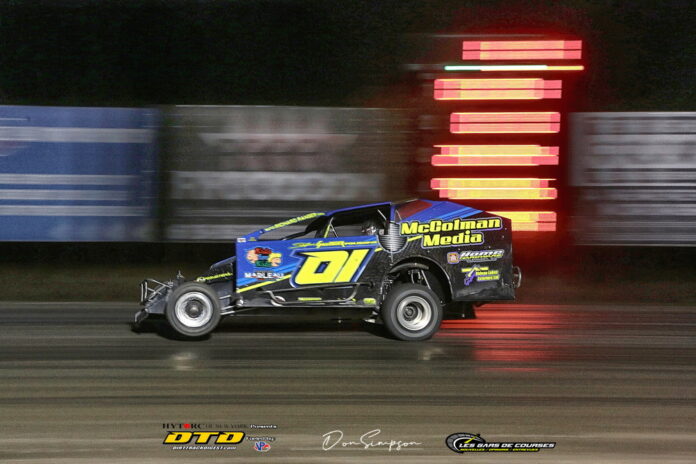 BROCKVILLE, ON – Chris Raabe had a 2022 year to remember at the Brockville Ontario Speedway. Capturing the track championship and at the end of the annual Fall Nationals, he completed a weekend sweep worth over $14,000 which pushed his win total to five at the fast quarter-mile.

The Saturday night finale was also the final event on the DIRTcar 358 Modified Series where Dave Marcuccilli had a formable lead over his only title contender in Lance Willix. While Willix came home with a solid fifth place finish, Marcuccilli’s 12th place tally was good enough to capture his first ever DIRTcar 358 title.

While Raabe’s place atop the lap counter after 100 laps made it sound like an easy, walk through the park, it was far different:

First was a still challenge from Quebec’s David Hebert who led much of the first half of the race before his car caught flames at the halfway mark. While a scary moment indeed, the mandated DIRTcar safety equipment did its job and Hebert walked to the pits with no injuries.

The second challenge was from veteran Tim Fuller who kept Raabe in his site all throughout the second half of the race. However, the Alexandria, Ontario native drove flawless laps to see the double checkered flag and a popular victory.

“First, I’m glad David (Hebert) is ok. When you see fire, it just scares you,” Raabe mentioned on the lap 50 drama, “He was fast, we swapped spots a few times and then he really got fast on the bottom of the track. I felt more comfortable up top and was most likely going to stay there to see what happens.”

Raabe went on about his plan, “When we got the lead I just stayed to the plan, especially in turns one and two. You can just get such a good run down the back stretch if you position yourself right.”

While his unique lane did open up some distance over Fuller on long runs, it didn’t come without its hurdles. “When you go so high in turn one lots of times you’re just hoping it sticks, there wasn’t much up there to lean on,” said the driver who also took second in the Hoosier Racing Tire Weekly points, “And…there was also a small bump up there and a few time I hit it wrong and I just about went over, more than once! But it worked and just a nice finish to a good season here at Brockville.”

For Fuller, he saw the back deck of Raabe’s #01 for most of the event and for the second night in a row. “He’s just fast here and you have to be on your game to beat him,” the Watertown, NY driver quipped, “There were times that I thought I had a better car, but he was just faster on more laps than I was.

“Second is ok, you want to win but we had a decent weekend with second last night, car is one piece,” Then in all his “Fuller-ism” he summed up the weekend in a few short words, “I’m just glad this ‘stuff’ with the Canada border is over so we can come up here and race.”

While Raabe and Fuller took the race headlines, a quiet 12th place finish brought all smiles to the likeable driver from Montezuma, NY. Dave Marcuccilli has won DIRTcar Sportsman championships and now he can add the 358 title to his resume.

“I am very happy, this was always the goal when I started to run the 358 Series a few years ago. To actually get the championship just makes all the time you work at it all worth it,” he said with a grin from ear to ear sitting in victory lane getting accolades, “We were very consistent ( five top 10’s in seven races) and that is key when you try to run these point deals. Yea to want to win but finishing is key.”

While you think a conservative approach would be the plan, he differed. “When the race started I was actually trying for a top five or something like that. The track was the best I have ever saw it here, you can run anywhere so I was going to see what I could do,” he went on, “Then I got pinched in the wall about halfway and then I just though, ok, let’s stay smooth and do what we need to do.”

Then after a sigh of relief, it started to sink in, “We are a small team but do have a bunch of people that do help me, I just have to thank them.”

Finishing behind the leading duo was Corey Wheeler followed by Ryan Arbuthnot how also claimed three wins and was runner-up in the points to Raabe at the track known as the “BOS”. Willix’s fifth place finish secured a solid second place finish in the overall points capping off a solid season for the veteran.

Rounding out the top ten were Erick Rudolph, Danny O’Brien, who will call it a career behind the wheel, Luke Whitteker, Michael Parent and Ryan Bartlett who ended up third in the Series points marking his best finish ever.