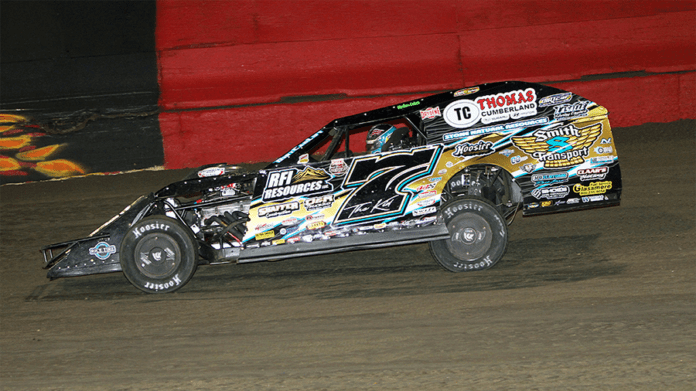 TAMPA, FL – A first career DIRTcar UMP Modified Winternationals Feature win against some of the best talent in the state of Florida. Not bad for a 15-year-old kid from Pennsylvania.

That’s exactly what Drake The Kid Troutman accomplished in Round 1 of East Bay Raceway Park’s Winternationals Tuesday night, driving by UMP Modified veteran Tyler Nicely just after halfway to pick up the $1,000 victory and start his DIRTcar Florida Winternationals points chase off with a bang.

“It’s really cool to win against this caliber of guys,” Troutman said. “[My crew] did a great job tonight. Everything worked out perfect.”

In all, Troutman, of Hyndman, PA, topped a 48-car field, complete with some of DIRTcar’s most recognizable names in UMP Modified racing, including Nicely, Lucas Lee, Dave Hess Jr., Jeff Mathews and more. He grabbed his eighth-place grid spot by the horns and instantly dropped the hammer, advancing six positions in just seven laps to take second.

“I knew I had a really good racecar when I got up to fourth. I didn’t think I had a winning racecar; I figured I’d be a second or third-place car,” Troutman said.


Troutman then began his march to the front, chasing leader Nicely, who had passed six cars in the first two circuits to grab the early lead. A few early cautions restacked the field and cut into Nicely’s chances to break away from the field, aiding in Troutman’s run to the front. One of which bit the outside polesitter, Lucas Lee, who was hit with a flat tire on Lap 7, forcing him to the pits and the rear of the field for the restart. He was unable to make up the ground in the end, and finished 17th.

“I just got a little tight there towards the end and tried a new line going into [Turn] 1 and Drake got by me. He ran a pretty good race,” Nicely said.

Now with the lead, Troutman turned up the juice and began to open up a gap of his own as he approached lapped traffic. He handled the first few small waves of it with no problem, but the laps were counting down and a thick pack of traffic was forming in front of him as he crossed the stripe to take the white flag.

Nicely, of Owensboro, KY, was digging hard behind Troutman and had managed to close the gap to within a single car length. Troutman decided to take it back to the high side for the final corners with slower cars in both high and low lanes, while Nicely threw it hard into Turn 3 for one final shot at the lead.

Troutman nearly made contact with the back of the slower cars in front of him coming out of Turn 4, but he was able to steer clear and hang on for the win.

“We hit lapped traffic there, where we were racing three and four-wide. Me and a lapped car about got together and Nicely pulled up alongside of us, but we had enough momentum off the top to hold on,” Troutman said.

Nicely came up short with the last-lap slider in the waning seconds, but knew it wasn’t worth causing major issues on night number one.

“I messed up going into 1 on the last lap and that killed my shot to get him in 3. I probably could have sent it in a little harder, but there’s no reason to tear stuff up on night one,” Nicely said.

Nicely’s new Longhorn by Loenbro chassis hasn’t often been beat since its debut in Florida last November, but he and the crew know the work they have to do before the big 75-lap, $5,000-to-win finale Saturday night.

“We probably could’ve been a little freer at the end of the race. We were good at the beginning, through the middle, just got a little tight at the end. Just couldn’t steer into the corner like we needed to,” Nicely said.

The DIRTcar UMP Modified Winternationals racing action continues from East Bay Raceway Park Wednesday night with another $1,000-to-win main event. Keep it locked to all of DIRTcar Racing’s social media channels for all the latest and greatest news, content and live event updates as they happen throughout week.