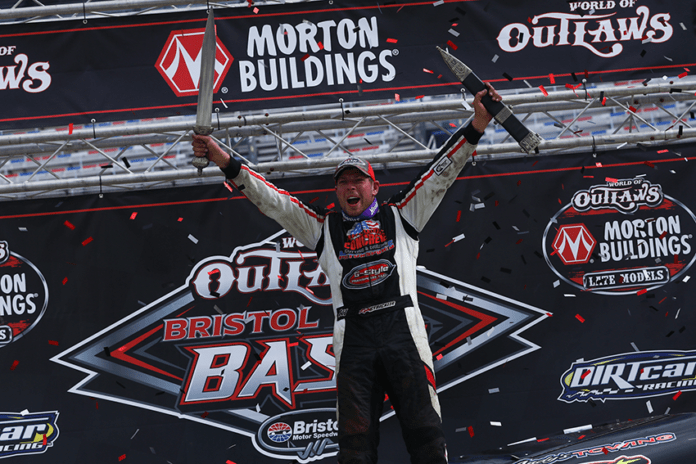 BRISTOL, TN – Most drivers would agree – driving just one car around Bristol Motor Speedway in a day is hard enough. Kyle Strickler drove two on Sunday afternoon and came out $10,000 richer.

“The Modified is so much fun to me. After having a rough weekend with the Late Model, it was very refreshing to have a bunch of fun in the Modified,” Strickler said.

While it was a trying weekend for him in the Late Model, his Modified program was far more set up to his liking. This, and his familiarity in the seat of the Modified significantly helped him in the Feature.

“The Late Model side of it is so finnicky and all of your adjustments are fine-tuned and so touchy,” Strickler said. “The Modifieds – you’re going so much slower; they slip and slide around and there’s so much less grip that they don’t dart around as much.”

In short, Strickler ran a flawless race. None of his competitors had any strong challenges for him, even on a Lap 4 restart after a caution that took Friday night’s Feature winner, David Stremme, and Dave Wietholder out of the race when they collided in Turn 4.

With outside polesitter Kyle Hammer keeping him in-sight behind him, Strickler reached the rear of the field with only a handful of laps remaining. After mainly running the preferred low groove to that point, The Highside Tickler put his nicknamesake on full display and maneuvered around the slower traffic.

“I could rip the top in the Late Model, and I tried it there at the end in the Modified and it really helped me get through lapped traffic,” Strickler said.

Strickler’s always preferred the bigger, faster tracks. With several UMP Modified victories in his career at other high-profile half-miles at Volusia Speedway Park and Eldora Speedway, it comes as no surprise he excelled in the high speeds of Bristol.

“I think a lot of it is just me liking these big racetracks, and just all fun, no stress, jump in the Modified and have a blast,” Strickler said. “Your finishes are usually directly related to your mood or how you’re feeling about one car or the other.”

Despite his best efforts, Hammer was unable to catch Strickler in the final laps.

“Down the straightaways I could kinda see him just getting closer and closer each time,” Hammer said. “Toward the middle, once we got opened up and our tires really kicked in, I feel like we had a better car, just couldn’t do much at that point.”

However, Hammer did take home the honors of the highest average-finishing driver with two runner-up results on the weekend. Overall, a great showing for the young Illinoisan.

Chris Arnold crossed the stripe in third, completing an up-and-down weekend for he and his crew. Starting third in Friday’s Feature, Arnold caught a piece of a wreck heading into Turn 1 on the first lap and was forced to retire. But a great run Sunday showed exactly what the Virginian team is capable of.

“I think we had one of the fastest cars like [Hammer] and Strickler all weekend,” Arnold said. “I think [Friday] night, we would’ve been pretty good. I wish I had moved up to the top from Lap 1 and I think both of us probably would have been right there with Strickler.”

Like Hammer, Arnold agreed once Strickler got out front, the chances of catching and passing him were slim.

“You’ve got to use every type of advantage you have against him, and at this point, it would have been going to the top sooner than he did,” Arnold said.

If you can’t be at the track, catch all the action live on DIRTVision presented by Drydene.