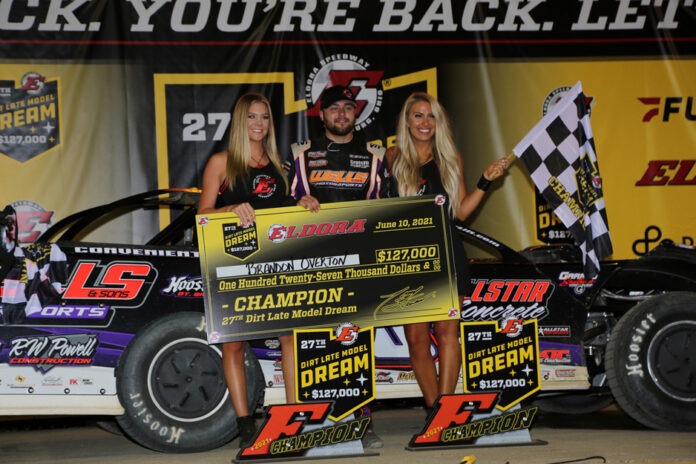 ROSSBURG, OH – With four preliminary Feature victories in crown jewel events at Eldora Speedway over the last four years, Brandon Overton had been knocking on the door for his first big one at The Big E for what seemed like an eternity.

But on Thursday night, Big Sexy finally broke through for a $127,000 victory in the 27th Dirt Late Model Dream, outrunning multiple past Eldora winners en route to sealing the win.

“That’s the coolest thing I’ve ever done in my life,” an astounded Overton said in Victory Lane.

Since joining forces with longtime friend Eric Wells and the Wells Motorsports team in November 2019, Overton has won numerous big races across the Super and Crate Late Model worlds. He took some time in Victory Lane to reflect back on the decision he made to swap teams that fall and the impact it’s had on his career ever since.

“It [was] a career-changer for me,” Overton said. “It was probably the best decision I’ve ever made in my life. I hope we race for a long time together because him and Eric [Wells] are great. I couldn’t ask for anything else.”

Overton, of Evans, GA, began his 100-lap journey from fourth on the starting grid and made his presence felt immediately, jumping into second on the very first lap to start his lengthy battle with defending Dream winner Brandon Sheppard.

Overton chased the defending Dream champion around the half-mile for over half the race, making countless hard charges to Sheppard’s inside in attempts to get a run on him and make the pass.

His best chance finally appeared just after a restart on Lap 61, where a great run out of Turn 2 gave him the burst of speed he needed to complete a slide job pass for the lead in Turns 3-4.

Now out front, Overton turned on the jets and began to rapidly open up a gap between he and the field behind him. Fortunately for him, only one caution flag appeared in the rest of the time he led, which didn’t allow his challengers the chance for the pass on a restart.

“I just wanted to stay in front of [Jonathan Davenport] and [Tim McCreadie],” Overton said. “I kept seeing them coming.”

While McCreadie was indeed coming, it wasn’t quick enough to catch Overton in the end. The final third of the race went caution-free, and Overton drove away to collect the richest payday of his career.

“I know this is where I should be,” Overton said. “All them years I’ve been up and down the road with nothing, learning how to do this, it makes it all worth it.”

McCreadie, of Watertown, NY, was able to hang on for second, despite having an odd-handling car for the latter half of the race.

“Every time I moved up, I lost time. So the best thing I could do was try and dump it on the right-rear to load it, and if it could keep posture, I could get a good bite. But that stuck me in one lane,” McCreadie said.

Kyle Bronson, of Brandon, FL, had a very active race overall – starting out strong, then fading a bit and repeating again before the race was out. A mid-race surge after that final caution brought him back up to third, where he stayed to collect his career-best Dream finish.

Bronson was a bit unhappy with some of his opponents at race’s end – specifically on the final restart where he said he and Davenport came together.

“On that restart, I spun the tires a little bit and the 49 just turned dead-left and knocked my tire off, so it was really tough there at the end,” Bronson said.

And while he didn’t make it to the podium, 2016 Dream winner Dennis Erb Jr. had one incredible run to a sixth-place finish in the Feature. Erb struggled in his Heat Race after a rain delay reset the track surface and was forced to come from the final row in the first B-Feature. He made it to fourth, one spot shy of a transfer, but inherited the spot anyway when third-place Ross Bailes was determined to be light at the scales.

Erb took the 25th Feature starting spot and drove it all the way back up to sixth before the checkers – a great showing for the World of Outlaws regular.

The Dirt Late Model Dream action from Eldora Speedway isn’t over yet – the DIRTcar Late Model field now makes a quick turnaround for the 26th Dream, beginning with preliminary night #2 and the Twin-25, $10,000-to-win Features. 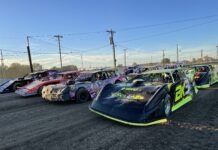