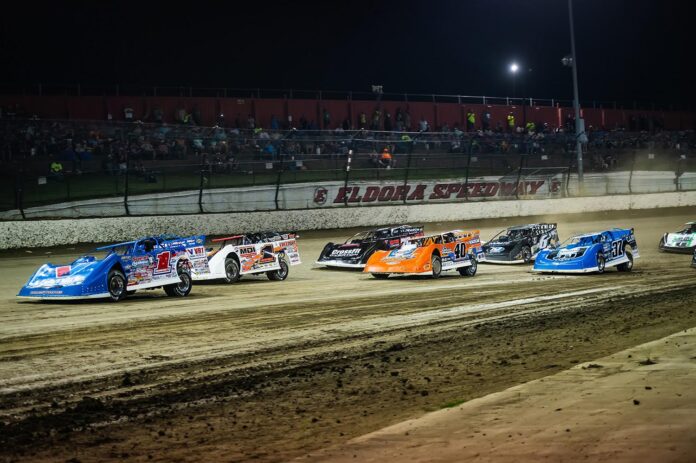 ROSSBURG, OH – Double the globes, double the fun. Less than one month remains before the biggest DIRTcar Late Model race in the world kicks off in back-to-back fashion – the 51st and 50th runnings of the World 100 at Eldora Speedway.

For the first time in its history, two separate editions of the famed event will be run over a four-day period – Wed-Sat, Sept. 8-11. The 50th (2020) World, postponed to 2021 due to health restrictions from the pandemic last September, will be run Friday and Saturday night after the 51st (2021) World, contested on Wednesday and Thursday.

Thursday and Saturday’s starting lineups will once again be decided via Eldora’s unique Every Lap Matters format, which awards drivers points for their finishes in each event from Qualifying to the Feature during preliminary nights.

Drivers from all areas of the country make the trip out to the cornfields of Western Ohio for the annual spectacle, and this year’s expected roster features names with some of the most interesting storylines in recent years.

Topping the list is a man who has downright dominated the Dirt Late Model World in 2021 – Brandon Overton. The Evans, GA-driver has won 21 of his 57 starts thus far, collecting victories in a variety of prestigious and high-paying events, most notably his sweep of the double Dirt Late Model Dreams at Eldora in June. He followed that up with his second career Firecracker 100 title at Lernerville Speeedway two weekends later, and a $20,000 victory in the marquee Carolina Sizzler event at The Dirt Track at Charlotte in July.

Most recently, Overton brought the broom out again this past weekend, winning on both nights of the North/South 100 at Florence Speedway in Union, KY. With all of these accolades collected at this point in the season, he’ll be heavily favored to win at some point during the four days of the double World 100s.

Over Eldora’s 68-year history, only one name has been to Victory Lane in Dirt Late Model crown jewel events more times than anyone else. Scott Bloomquist, the four-time World 100 champion and eight-time Dirt Late Model Dream winner, has been out of action since late July due to complications in his right leg, stemming from a hip replacement surgery in January 2020. His team soon announced DIRTcar UMP Modified ace Nick Hoffman would temporarily fill-in for Bloomquist while he takes time off to recover.

Hoffman, who started all four Features he attempted to qualify for at the double Dreams in June for the Hatchers Auto Sales team, has been on a tear in the UMP Modified world this summer, winning in 19 of his 20 starts aboard the DIRTcar Summit Racing Equipment Modified Nationals tour through the Midwest. While it’s uncertain how long Hoffman’s duties at the controls of Bloomquist’s #0 will be needed, he will still likely appear in the event, piloting either one of the Late Model rides he’s driven this year.

Bobby Pierce has also been on a dominant tear through the Midwest this season, capturing 12 wins aboard the DIRTcar Summer Nationals Late Model tour. Currently en route to collecting his fourth Hell Tour title, Pierce will be looking for a bounce-back performance from his efforts at the double Dreams.

While he qualified for all four Features he attempted at Eldora in June, Pierce was only able to muster finishes of 15th and 19th in the 100-lap finales. As the youngest World 100 winner in history at 19, Pierce has yet to reach Victory Lane in any Eldora crown jewel event since his winning year of 2016, but will be riding a massive wave of success from his Summer Nationals efforts this season.

After competing at Eldora in a Late Model for the first time in his career in June, Kyle Larson is expected to be back behind the wheel for the double World 100s this September. He came into the double Dreams looking for his first career Late Model crown jewel win, but will now be going for his second this fall.

Larson, the all-around motorsports star from Elk Grove, CA, won the 31st Prairie Dirt Classic at Fairbury Speedway in July in his first attempt to qualify for the famed event. He’s expected to be back behind the wheel of the K&L Rumley Enterprises #6 to attempt his first World 100 start, still riding the wave of momentum from each of his wins in Sprint Cars, Late Models, Midgets and Cup Series races this year.

While the World 100 was not contested last year, the inaugural Intercontinental Classic was held in its place and won by none other than the three-time World 100 champion, Jonathan Davenport.

Davenport, of Blairsville, GA, is also the defending World 100 champion, which he won for car owner Lance Landers in 2019. He and the Double L Motorsports team have done well in their marquee event starts this season, capturing the Wild West Shootout finale in January, a $50,000 check for first place at the dirt-covered Bristol Motor Speedway in March, plus another $25,000 payday at the revived 5/8-mile of West Virginia Motor Speedway in June.