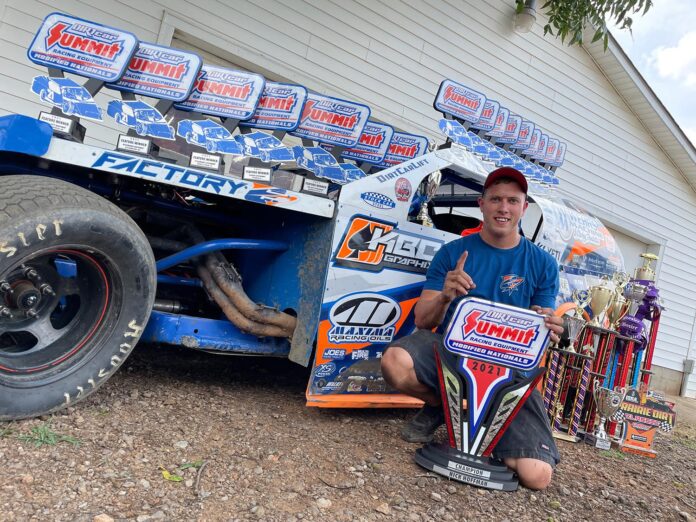 To many, these seem like video game-type numbers. But to Nick Hoffman, this was reality at the end of his 2021 DIRTcar Summit Racing Equipment Modified Nationals campaign – one that also broke the record for most consecutive victories (8) and most wins all-time (57).

The 29-year-old UMP Modified star from Mooresville, NC, turned a lot of heads this summer, traveling around the Midwest with crew member Shawn O’Neill on a tour of utter domination. But like most awe-inspiring seasons across sports history, those involved often don’t get the chance to soak it in until it’s all over.

“It’s kinda weird looking back at it, as it was going on,” Hoffman said. “We didn’t really realize what we were doing. You just kinda look past it and are always racing for the next day.

“Now that we’ve had a couple weeks here, it’s just pretty wild to look back at it. I guess we took it for granted at the time. It’s going to be something that people talk about for years, I think.”

In fact, people have already been talking about it, and there doesn’t seem to be any end in sight. Since early June, Facebook newsfeeds and Twitter timelines of fans and industry professionals have been dotted with the chatter about Hoffman’s accomplishments, both positive and negative.

From spectators’ cheating and cherry-picking accusations to full-on wars of words in the comment sections between his supporters and naysayers, Hoffman’s seen it all online this year. But he knows whether they’re for or against him, just the fact that they’re talking about him means he’s doing something right.

“I enjoy reading all the stuff, whether it’s good stuff, bad stuff, whatever… I don’t care,” Hoffman said. “It doesn’t matter who you are – as long as they’re talking about you, it’s a good thing.

“I use the negativity as just fuel to the fire to make me want to win the next night again.”

The two-time DIRTcar UMP Modified national champion took to Twitter daily over the summer and was more active on the platform than he ever had been, providing followers with updates and commentary on his travels and racing. It’s a strong method of interaction with his fans that he says more drivers should be taking advantage of.

“I think a lot of racecar drivers don’t use social media to their benefit,” Hoffman said. “I get a lot of people that just come up to me and say, ‘man, I really enjoy following you on Twitter.’ At the end of the day, those are the type of people that are going to buy t-shirts or root for you in the stands. I think a lot of guys miss out on that.”

One of Hoffman’s biggest moments on social media this season came with his announcement regarding his new driving duties behind the wheel of Scott Bloomquist’s Drydene #0 car while the Dirt Late Model Hall-of-Famer recovers from injury complications.

Hoffman drove the Team Zero Race Car to a seventh-place finish in his first night out at Davenport Speedway, then qualified for the 31st Prairie Dirt Classic four days later at Fairbury Speedway. He also bagged a podium finish in a preliminary night of action at Batesville Motor Speedway last weekend, displaying the high-quality results the fans are used to seeing from both Hoffman and Bloomquist’s #0.

“It’s the best opportunity I’ve ever had, as far as the equipment to run up front every single night,” Hoffman said. “I’ve had great equipment in every Late Model ride I’ve ever drove, but this obviously has the knowledge of Scott, and everybody put in place.”

Right now, Hoffman said he will compete in the upcoming double World 100s at Eldora Speedway – the same place where he qualified for all four Features of the double Dirt Late Model Dreams back in June, piloting a Team Zero Race Car for the Mahomet, IL-based Hatchers Auto Sales team.

And while he’s made his home and career in the UMP Modified world, Hoffman’s hoping the success he’s had thus far will bring him more Late Model opportunities in the future.

“I’d like to do some full-time Late Model stuff, it’s just all about getting the right deal and the right opportunity put in place,” he said.

Between racing the Late Model for Bloomquist and his own UMP Modified this season, it’s been a challenge for Hoffman to balance racing and work at his Elite Chassis shop – a simple two-car garage behind his parents’ house in Mooresville.

His work on the jig has given his customers the tools they need to succeed, and it’s shined bright this year with the rise of teenage Modified sensation Hunt Gossum and his three Summit Modified victories. A new Elite car also put 2012 Summit Modified champion Kenny Wallace in Victory Lane at Fayette County Speedway in July. However, it’s still been a struggle for Hoffman to keep up with the fabrication process back home.

“It’s pretty crazy right now – I literally cannot take on any more orders,” Hoffman said. “I want to race 90 times a year, and I only want to build 15 cars a year. I’ve got very good clientele right now, and right now I just can’t take on anymore work.”

One of Nick’s biggest helps in the shop his father, Darrell. A Midwest native now living in Mooresville, Darrell has been an engine builder for several drivers across multiple disciplines over his career. He builds and maintains Nick’s powerplants at the NASCAR Technical Institute building in Mooresville, where he teaches his craft to only the top-level students at the university during the week.

Darrell’s support, either at the track or over the phone, has always played an integral role to Nick’s success.

“Every single night, whether it was on the Hell Tour or when I race a Late Model – when he’s not there, he’s normally the first one to call me. Just to kinda go through how everything went and whatever we gotta do for the next day,” he said.

Now with his fourth championship and chart-topping win total, Nick joins the greats of the UMP Modified world – some of which Darrell raced against back in his days of competition. But to Nick, one of his biggest inspirations has always been the former four-time DIRTcar UMP Modified national champion, Jimmy Owens.

“I’ve always chased the Summer Nationals and the [DIRTcar national points] deal the last couple years, and the way I wanted to do it was the way Jimmy Owens did it. To me, he was the best, and he still is one of the best.”

“I wanted to always do it like Jimmy did it. If there was a race to be won or a decent paying race, he went and did it. Whether if that was in Indiana or Illinois, Tennessee, Kentucky, wherever… he traveled around and he beat whoever he had to beat to win the national title.”

While the regular season moves forward for another month still before national and regional champions are crowned, Hoffman maintains an 84-point lead in the nation with 27 wins total over 47 recorded races. Should he win the national title a third consecutive time, he will tie Devin Gilpin for third-most in DIRTcar history behind only Owens and Mike Harrison.