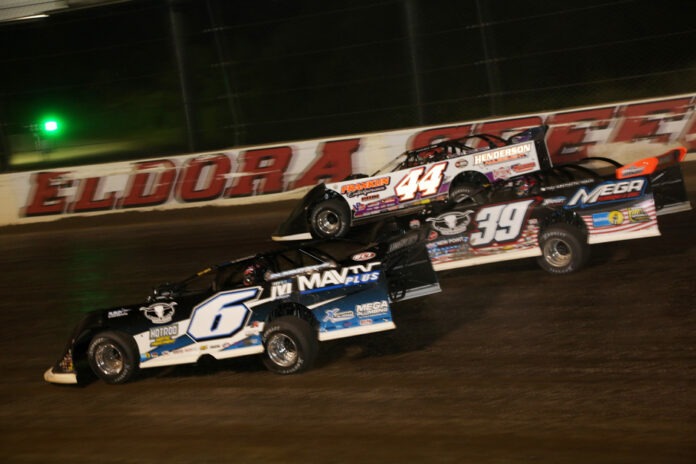 ROSSBURG, OH – For the first time in its 51-year history, the biggest Dirt Late Model race in the world will be run twice in the same week. The 51st and 50th editions of the World 100 are finally here.

It’s been since September of 2019 the last time the DIRTcar Late Models graced the hallowed grounds of Eldora Speedway for the most prestigious race on the calendar. The global pandemic postponed the 50th World 100 last September to this Fri-Sat night, Sept. 10-11, where a $53,000 check will be awarded to Saturday’s 100-lap Feature winner. The 51st World 100 will precede the 50th on Wed-Thu night, Sept. 8-9; $54,000 goes to the Feature winner on Thursday night.

Thursday and Saturday’s starting lineups will once again be decided via Eldora’s unique Every Lap Matters format, which awards drivers points for their finishes in each event from Qualifying to the Feature during Wednesday and Friday’s preliminary nights.

If you can’t be at the track, be sure to follow DIRTcar Racing on social media for live updates throughout the week.

DREAM TEAM – Brandon Overton and the Wells Motorsports crew did the unthinkable this past June, winning all four Dirt Late Model Dream Features they started for a collective total of $273,000 in prize money. This time, they’re back – not just for the money, but for an equally large amount of prestige and a tall globe trophy. Or two.

This will be the 30-year-old Georgian’s best chance to capture his first career World 100 title, after only three previous starts in the event. He’s won 22 times in 62 starts this year, or slightly better than one out of every three races.

Overton’s still riding a high wave, having beat the World of Outlaws Morton Buildings Late Model Series regulars for $40,000 this past Thursday night at Cherokee Speedway, and will look to make that $13-14,000 more this week.

DEFENDER OF WORLDS – Jonathan Davenport has won the previous two fall marquee events at The Big E, capturing the 2019 World 100 and last year’s replacement event, the Intercontinental Classic. The 2019 globe matches the other two he previously collected in 2015 and 2017.

Davenport’s been just as dangerous in marquee events this season, capturing the Wild West Shootout finale in January, a $50,000 check for first place at the dirt-covered Bristol Motor Speedway in March, and most recently another $50,000 for his second career USA Nationals title at Cedar Lake Speedway last month.

Bloomquist, Eldora’s winningest driver in crown jewel races from Mooresburg, TN, has recovered from injury complications he suffered in July and will climb back behind the wheel of his Hotrod Septic Treatment #0SB alongside Hoffman – the driver Bloomquist’s team tapped to fill-in for him during recovery.

Hoffman, of Mooresville, NC, has shown plenty of strength during his time behind the wheel of the Drydene #0NH, posting four top-five finishes against national-touring fields in 11 starts since late July. He last drove a Team Zero Race Car for the Hatchers Auto Sales team to all four Features he entered at the Dream in June and will look to repeat that success this week.

ONE SHOT – With his NASCAR obligations on Saturday, Kyle Larson is projected to compete in just the 51st World 100 this Wednesday and Thursday.

Larson, of Elk Grove, CA, posted finishes of 13th and sixth in both Dream Features in June and has since gone on to one memorable summer at the controls of the K&L Rumley Enterprises #6. He first won the 31st Prairie Dirt Classic at Fairbury Speedway and again with the World of Outlaws at Ohio’s Sharon Speedway just a few weeks later.

Now armed with some Late Model experience at the half-mile, Larson returns among the favorites to win at least once over the week.

He qualified for the 26th Dream in June, showing his ability to wheel against the national-touring stars in the big moments. Now with some experience and a win at The Big E, Hughes looks to make his first career World 100 start this week.

LEADING THE FLOCK – Brandon Sheppard, of New Berlin, IL, comes into the biggest race week of his long schedule as the current World of Outlaws points leader and with a heap of momentum, stringing from four victories in his last 10 starts.

While Sheppard scored car owner Mark Richards’ first-ever Eldora crown jewel win in the 2019 Dream, he’s yet to win a World 100. After a top-five in the 27th Dream and a DNF in the 26th, Sheppard and the Rocket Chassis house car team will be back with vengeance this week.

TERBO RETURNS – Tyler Erb, of New Waverly, TX, has been cleared of his suspension from World of Outlaws & DIRTcar Racing events and is set to return to crown jewel action at Eldora for the first time since the 2019 World 100.

Terbo placed 10th in his first DIRTcar race back in Sunday’s Baltes Classic. He’ll go for his third career World 100 start this week, trying to top the stellar third-place showing he had in 2018.