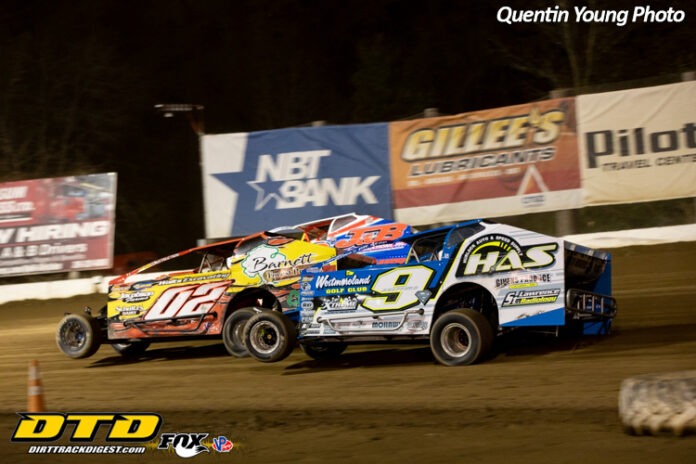 CONCORD, NC – From January to Labor Day, five divisions of northeast DIRTcar racing saw drivers in each awarded points towards the $47,000 Hoosier Racing Tire Weekly Championship based on their 16 best finishes.

The points system rewards drivers for racing at their home tracks every week plus, thanks to a common ruleset, encourages drivers to travel to other DIRTcar tracks and Series races to accrue more points and experience.

Peter Britten has had one of the best years of his career. Britten finished third in Hoosier Championship points collecting four wins including a Series DIRTcar Series win at his home track Land of Legends Raceway.

St. Catharines, ON driver Mat Williamson, is no stranger to Victory Lane but now he is starting to make championships look routine too. Williamson, who is fighting for a podium on the Super DIRTcar Series standings going into the NGK NTK World Finals, picked up this year’s DIRTcar 358 Modified Hoosier Racing Tire Weekly Championship title worth $3,000.

This is Williamson’s third Hoosier championship in a row. Only this year’s third-place overall David Herbert has won three in a row and he made it four between 2014 and 2017.

Billy Dunn finished second in points but he also won the DIRTcar 358 Modified Series championship this year on the back of his herculean efforts to finish the race at Oswego Speedway in the Salute to the Troops 150.

Check out the full points HERE. The top 20 in points will share from the over $14,000 cash point fund.

Andrew Buff has proven his ability to win championships at home and is taking the show on the road. Buff is this year’s DIRTcar Sportsman Modified Hoosier Racing Tire Weekly Championship title winner collecting $1,000. The star DIRTcar Sportsman Modified Series: East Region driver beat out both Cameron Tuttle from the West and Zach Sobotka in the Central Region by six points. Tuttle and Sobotka finished tied in the Hoosier standings with 906 points.

The final opportunity race for DIRTcar Sportsman Modifieds comes up at the Drydene World Short Track Championship from Thursday, October 28 to Saturday, October 30, 2021 at The Dirt Track at Charlotte.

This is Jeseo’s second DIRTcar Pro Stock Hoosier Racing Tire Weekly Championship title which he will take home a $1,000 check at the annual awards banquet. His first came in 2012.

Mancuso will take home $500 for his first ever title and the top 10 in the points will share from the over $2,500 point fund that was established.

Check out the full points HERE.

Watch for more updates, schedule announcements, Features, and more at DIRTcar.com and on social media on Facebook and Twitter.