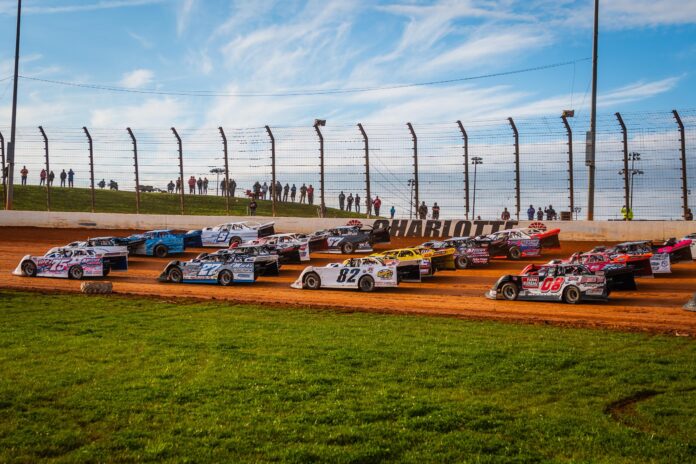 CONCORD, NC – The anticipation is building for one of the season’s biggest year-end events – the Drydene World Short Track Championship.

Nine divisions of weekly racers, including the two DIRTcar Northeast divisions – DIRTcar Sportsman Modifieds and DIRTcar Pro Stocks – will take to the The Dirt Track at Charlotte over three nights, Thur.-Sat., Oct. 28-30, in search of one of the most coveted trophies in fall dirt track racing. Seeing the red and white colors of Drydene Performance Products splashed across the surface of the unique oil barrel design in Victory Lane brings out the best in every driver – hundreds of which are expected to be in attendance next weekend.

Pre-registration has now eclipsed 200 drivers, all of which have automatically received two entries into the Saturday afternoon giveaway drawing for a brand-new Chevy Performance 604 Crate Engine. Drivers of all divisions are eligible to gain entries into the drawing by completing the pre-registration form at the link below by 11:59pm ET Friday. More ways to score additional entries will be available early next week.

Drydene will also be putting up a $1,000 bonus for the winner of Saturday’s Street Stock Feature to match a brand-new PRO20 helmet by RaceQuip for all Saturday Feature winners. Additionally, the Pro Late Model victor will take home a brand-new set of FOX Factory Shocks, and a $100 fuel certificate from VP Racing Fuels will be leaving with the winner, fifth-place, 10th-place and 20th-place in the Sportsman Modified Feature.

Sportsman of the Year trophies and Hard Luck awards/prize packs will also be handed out for each division, courtesy of Drydene.

While each division has its own stars and major contenders, the Summit Racing Equipment UMP Modifieds will be coming in with an abundance of heavy-hitters and drivers to watch.

World of Outlaws Morton Buildings Late Model Series full-time driver Chris Madden, of Gray Court, SC, has pre-entered to drive Pennsylvanian Dan Davies’ #71D UMP Modified for the event. While Davies has made appearances in the Saturday finale before, this will be Madden’s World Short Track debut.

It’s a great opportunity for the Team Drydene driver to get extra laps in on the 4/10-mile track before climbing behind the wheel of his own Rocket Chassis #44 Late Model the following weekend in the NGK NTK World of Outlaws World Finals, Nov. 4-6.

The UMP Modified Feature in each of the previous five years have been dominated by two men – three-time DIRTcar national champion Nick Hoffman and three-time World Short Track winner Kyle Strickler. Both are projected to compete and defend their titles this year against a long list of tough customers including (but not limited to) Madden, Chris Arnold, David Stremme, Matt Crafton, Evan and Jonathan Taylor, and Curt Spalding.

The FOX Factory Pro Late Models also boast a strong roster, filled with local talent. Michael Brown, of Lancaster, SC, has the most victories in the division with two coming in 2018-2019, and is projected to compete again this year. A host of other 604 Crate Late Model talent has already registered, including Bryan Mullis, Matt Long, Ben Watkins, Jody Knowles and Jeremy Mayfield.

The DIRTVision Hornet/FWD/Sport Compact division always turns out in big numbers and is expected to have another tremendous car count again this year. Announced Friday, an update has been made to their race format – all Friday and Saturday Features will now be lined up by a pill draw conducted on that day.

It all gets underway with a night of practice for all divisions and the first round of Features on Thursday night. Don’t miss a moment – buy a ticket online in advance, at the gate on race day, or stream every lap right to your personal device with a FAST PASS subscription to DIRTVision.