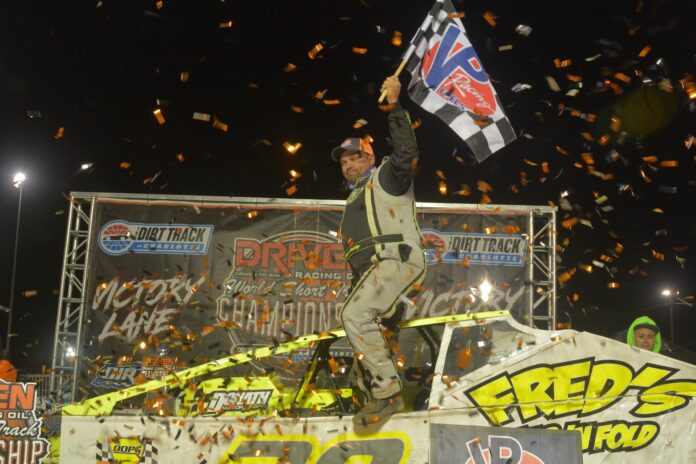 CONCORD, NC — Kevin Ridley is using his time off from working with the Superstar Racing Experience (SRX) by suiting up in his DIRTcar Sportsman Modified for the Drydene World Short Track Championship Oct. 28-30 at The Dirt Track at Charlotte.

After missing out on 2020’s Drydene World Short Track Championship, DIRTcar Sportsman Modifieds return to the event this year concluding with a $4,000-to-win non-points Feature on Saturday, Oct. 30.

Ridley, a standout racer from Waterloo, NY, who is one of 12 car chiefs on the SRX tour that features some of the biggest names in motorsports, is geared up to be competing at The Dirt Track at Charlotte once again.

“It’s a first-class facility,” Ridley said. “It’s always a blast to race there. I’ve got a lot of friends in the area so that’s a big part for me. It’s definitely a great experience. I would recommend to anyone that has a Sportsman car to go down there at least once. You don’t get to race many tracks like that in our cars.”

There are plenty of world-class DIRTcar Racing facilities in the Northeast but The Dirt Track at Charlotte has a special “NASCAR luster.” The Concord, NC facility not only features the premier 4/10-mile dirt track, but also includes the famous 1.5-mile Charlotte Motor Speedway and the four-lane zMAX Dragway. The atmosphere is unmatched.

“Charlotte is a tough place,” Ridley said. “You gotta have speed out of the box. It’s tough, but fun. It’s pretty much wide open all the way around there, but that track changes throughout the weekend that we are there. You’ll start off with the track tacky and red. As it gets run on it gets darker. We get around there pretty good for a crate car. It makes it fun. There’s nothing like it in the Northeast.”

Ridley took the checkered flag in the All-Star Invitational in 2019, but he is hungry to win the big one in Saturday’s finale.

“We haven’t had a lot of success there really,” Ridley noted. “It seems every time we go we get caught up in someone else’s mess. We did win the all-star portion of the event there in 2019. Hopefully, we learned a little bit and can bring it to this one.”

New drivers shouldn’t be intimidated by the enormity of the event.

“It’s a race,” Ridley said. “It’s the same race car. Stagger is your friend down there. You gotta keep the car turning. Charlotte is like a big circle for our cars. You’re always turning so stagger doesn’t hurt you.”

Although he hasn’t been in the driver’s seat much this year, Ridley has been spending plenty of time at the race track. Ridley is one of the crew chiefs for the 12 SRX cars that compete in each race. Ridley even had former World of Outlaws Morton Buildings Late Model Series champion Scott Bloomquist as a driver.

That said, Ridley noted the SRX cars and DIRTcar Sportsman Modifieds have very little in common.

“There’s not a lot of comparisons,” Ridley said. “We do run the same rear end in our Sportsman as we do in the SRX cars. It’s a DMI rear end. Other than that there’s not much similarity.”

Drivers can register here to take part on the big stage at The Dirt Track at Charlotte for the Drydene World Short Track Championship that kicks off on Thursday. Tickets are available by clicking HERE.

For race fans who can’t make it, every lap will be live on DIRTvision presented by Drydene, either online or with the DIRTVision App.