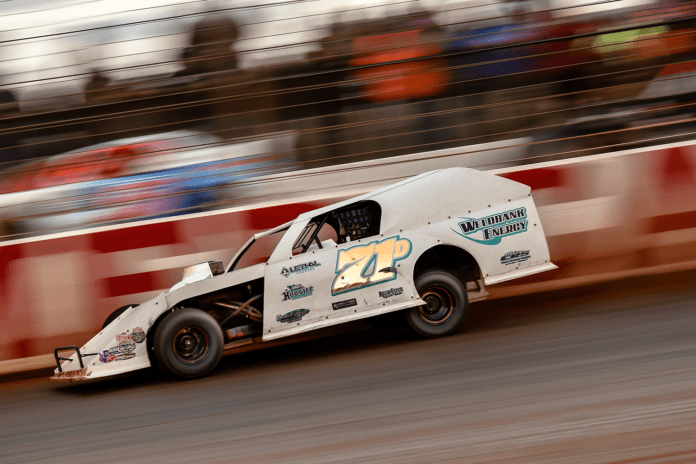 CONCORD, NC – For never having driven a DIRTcar UMP Modified before, a runner-up finish to the No. 1 ranked driver in the country last weekend was not too shabby of a debut for Chris Madden.

The Late Model star from Gray Court, SC, will wrap-up his third full-time season aboard the World of Outlaws Morton Buildings Late Model Series in the NGK NTK World of Outlaws World Finals at The Dirt Track at Charlotte, Thu-Sat, Nov. 4-6. But after a hectic and highly competitive 47 races behind the wheel thus far, Madden needed a getaway. One where he could let loose and have some fun, but still be on the racetrack.

In fact, he had just returned from vacation when he arrived at The Dirt Track last Friday afternoon, ready to strap into the seat of a UMP Modified for the first time in his Drydene World Short Track Championship debut.

By the time the weekend was out, Madden had Qualified better than 82 percent of one of the most stacked UMP Modified fields in event history, won his Heat Race, and topped it off with a second-place finish to three-time and defending DIRTcar national champion Nick Hoffman. Later that Saturday night, he ran third to Hoffman and Curt Spalding in the All-Star Feature.

But what did Madden, the accomplished Dirt Late Model veteran, want with the narrow-tired, open-wheeled style of the UMP Modified anyway? A challenge.


“I’ve always wanted to drive one because I’ve heard about [the car] having a big motor and no tire, no spoilers, and very little body to work with, compared to what I have,” Madden said. “I knew that it would be fun in the seat. It would be challenging to make all that happen.”

The man giving him that opportunity was Dan Davies, a Modified veteran from Warren, PA, and good friend to Madden.

“Being on the Outlaws deal in years past, [father] Ron and Dan always let me come by their shop and stay and work on my stuff at their shop,” Madden said. “They’re first-class people, and they took me in and treated me like I was part of their family.

“He gives us a shop to work out of and vehicles to drive to go do things during the week that we could normally do at home. They’ve just been really good people to me.”

Over the years, Davies and Madden formed a friendly and professional relationship that landed them in their new crew chief/driver positions for a big weekend out on one of the world’s most prestigious dirt track racing facilities. Madden said it took some convincing, but this year, he agreed to take on the task.

“Dan would always say ‘hey, come drive my Mod,’ and I would say, ‘man, I ain’t driving that thing, I’ve never driven one of them things,’” Madden said. “This year, we were getting ready to go on vacation, and his sister [Michelle Clanton] texted my wife, they’re real good friends, and said, ‘when are your vacation dates?’

“It was just a few seconds later my phone buzzed, and Dan had sent me a text and said, ‘you’re going to drive my Mod at Charlotte this year.’ And I just texted him back and said ‘okay.’”

The response to the news of their entry into the event was overwhelming. It even surprised the car owner.

“Honestly, it was just a couple friends that were gonna go have a good time,” Davies said. “I never thought more than that until [DIRTcar] posted on Facebook, and there were hundreds of likes, and I’m getting text messages.

“I texted David Stremme, who I’m really good friends with, and I’m like, ‘man, I really think I underestimated what might go on here.”

Their teamwork in the pit area was nearly unmatched, and the results speak for themselves. Two podium finishes in their first two starts together against the field they raced was remarkable, and their individual skills shined through.

“Dan’s a very intelligent guy, and understands a lot about a racecar,” Madden said. “I think he’s having fun just experimenting and working on it.”

“With him, knowing his experience and how to get around Charlotte, he’s got a bunch of laps around there, a second [place] was crazy awesome,” Davies said. “Everybody was pumped-up – his family was there; his crew guys were excited. It was very cool.”

After one day in the car, Madden could already tell the differences between the Modified and his Late Model.

“The biggest thing you fight is the eight-inch tires on it, it’s got no spoiler on it, and it’s got a big motor in it,” Madden said. “You fight having more motor than you do car.”

The outing in the Modified gave Madden a weekend of fun that he needed before turning the intensity back up in this weekend’s NGK NTK World of Outlaws World Finals at Charlotte. In these big races, his state of mind is a bit different.

“There’s a lot of stress on me when I Late Model race, being an owner,” Madden said. “But, I’ve got great sponsors that help me make that happen. Without them, I couldn’t do it, period. But, I still have to oversee all that stuff and make all the decisions and make sure everything’s going in the right direction.”

“Here, I’m just kinda driving and having fun at it. That’s what Dan said. He said we’re gonna have some fun, and I said okay.”

Davies echoed that sentiment, and recalls their post-race conversation that summed-up his driver’s first experience in the world of Modified racing.

While the 2022 Drydene World Short Track Championship remains 51 weeks out, Madden was keen on the idea when asked if he’d consider doing it all again next year.

“Absolutely,” Madden said. “It’s something to do for the fun of it, and I like having fun racing.”