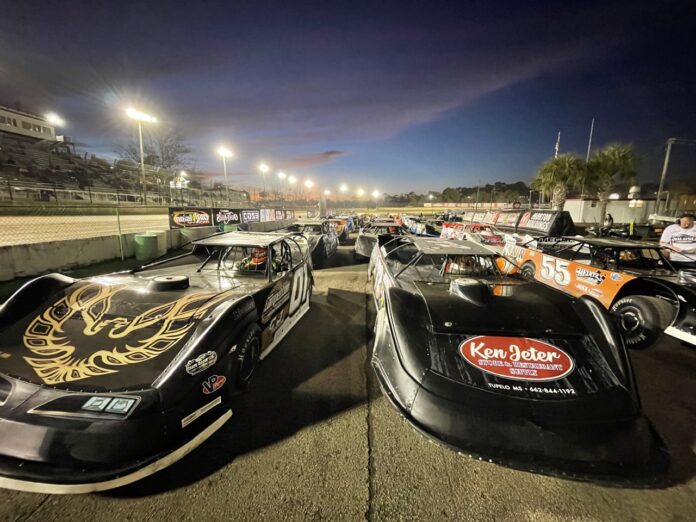 It’s an all-new format for the Pro Late Models this year, racing alongside the World of Outlaws CASE Construction Equipment Late Model Series and the local 602 Late Models. The new format focuses on the accrual of points over a series of Qualifying Features on Thursday and Friday, lined up by Hot Lap/Qualifying times on each night. Those points totals will lock the top-20 drivers into the Championship Feature on Saturday and take an additional number of drivers in from the Last Chance Showdowns.

Saturday concludes with a 30-lap, $10,000-to-win Feature and the crowning of a DIRTcar Sunshine Nationals points champion, awarded to the driver with the most Feature points accumulated over the weekend.

Tickets are on sale now at WorldofOutlaws.com and will be available at the gate on race day. If you can’t be at the track, stream every lap live on your device with a subscription to DIRTVision.

Here are the top storylines going into the fourth annual DIRTcar Sunshine Nationals:

WRECKERS TO CHECKERS – It was one year ago this Friday when Mark Whitener pulled off the biggest comeback win in Sunshine Nationals history.

Whitener, the veteran Super and Crate Late Model racer from Middleburg, FL, rolled his Super Late Model into the Turn 1 wall during World of Outlaws Late Model competition on Thursday night of last year’s event. Less than 24 hours later, he was driving his DIRTcar Pro Late Model into Sunshine Nationals Victory Lane for the first time in his career, overcoming brake issues in the closing laps of the Feature to hold on for the win and complete the turnaround.

He’ll be back on both rosters again this weekend as one of the only owner/drivers pulling double duty in his black/orange Baker Farms #5. Armed with years of 604 Chevy Performance Crate engine and open-engine Late Model experience, Whitener currently holds the best chance he’s ever had at the $10,000 grand prize on Saturday night, coming off a 10-win season in 604 Late Model competition.

THE CHAMP RETURNS – He’s been away since 2021, but this weekend, inaugural DIRTcar Sunshine Nationals Pro Late Model champion Kyle Bronson is back on the DIRTcar Pro Late Model roster.

The 32-year-old Super Late Model veteran from Brandon, FL, will pull double duty in both the Pro Late Model and World of Outlaws Late Model divisions, chasing his second career event points title. Bronson put on a display of dominance in 2020, sweeping all three Pro Late Model Features before coming back in 2021 and winning the $10,000 finale.

Bronson’s track record at Volusia is favorable, posting multiple Super Late Model, Crate Late Model and UMP Modified wins at the venue in his many years behind the wheel.

ICE BOWLER – Jason Welshan is taking his 2023 Ice Bowl championship with him to the shores of eastern Florida for a shot at Sunshine Nationals glory.

A big win on the Crate Racin’ USA Winter Shootout Series at Talladega Short Track two weekends ago brings Welshan, the 43-year-old racer/fabricator from Maryville, TN, into Volusia with a big swing of momentum after topping the 41-car field on Jan. 7.

As the owner and founder of his own Late Model chassis brand, Savage Chassis in Rockford, TN, Welshan has refined the technical makeup of his cars and maximized its potential, capturing the 2022 Crate Racin’ USA Dirt Late Model Series championship with four Feature wins over the course of the season.

ANOTHER SHOT – Defending CRUSA Winter Challenge Series champion Cory Hedgecock has come to Volusia for every edition of the DIRTcar Sunshine Nationals but has been shut out of Victory Lane each time. This year, he’s come to avenge his past defeats at the hands of his biggest foes.

Hedgecock, the two-time CRUSA Dirt Late Model Series champion from Loudon, TN, finished eighth in the Saturday finale in 2020, followed by back-to-back third-place results in 2021 and 2022.

Last year, the 30-year-old driver mounted a late-race charge in Thursday’s Feature, reeling-in leaders Mark Whitener and Shan Smith from sixth on the starting grid, but fell just short, settling for yet another podium finish.

MACK DADDY – The DIRTcar Sunshine Nationals Pro Late Model champion from two years ago returns to Volusia this weekend to reclaim what was once his throne.

Though McCarter missed the 2022 event, he went on to compete in Super Late Model action throughout the year, recording a Feature win at Boyd’s Speedway in May. Those laps will help his Crate racing efforts and give him a strong shot at another Sunshine Nationals championship this weekend.