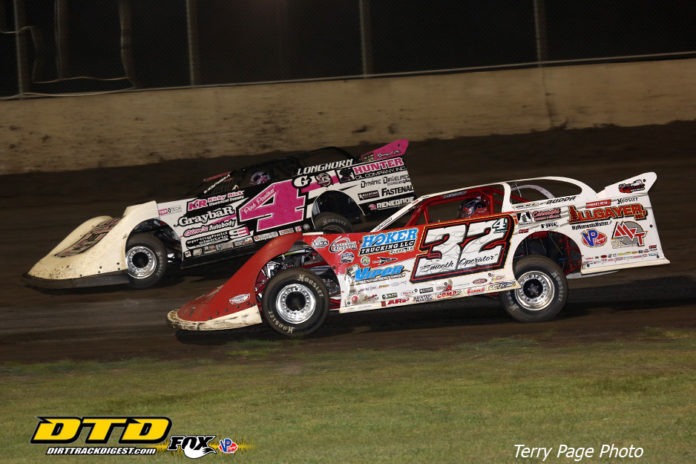 Coming from his fifth-place starting spot, Pierce used extreme-high line around the track to hunt down polesitter Ryan Unzicker, sporadically scraping the outside wall as he’s so often found doing. He caught Unzicker’s rear bumper just before halfway and wasted little time, making the move for the lead on a big run to the outside off of Turn 2.

Now with the race lead, Pierce made smart moves in lapped traffic and kept the high-side momentum rolling as he led the field back around to the checkers to pick up $10,000 in front of his home-state fans.

But The Smooth Operator’s Friday night didn’t go 100 percent the way he had planned, despite a stellar effort in the Feature.

“We had a tough day,” Pierce said in Victory Lane. “One of my crew guys hurt his back today and everyone had to pull through. We were busy 24/7 back there just trying to make the thing to go today. But we found a way to Victory Lane somehow.”


That “somehow” showed in the 23-year-old’s skill behind the wheel, as he piloted his #32 Pierce Platinum Race Car to victory, fighting a tight setup.

“The car was kind of a handful. As long as I got it straight, though, it was really good. Just getting it to turn was the hardest part. We had some drive, it just made it hard to run the cushion,” Pierce said.

Unzicker held strong on the bottom side of the track to claim the runner-up spot while Rick Eckert made a very successful trip out from his home in York, PA, and capped-off the podium.

Three-time and defending Summer Nationals champion Brian Shirley had a solid night, coming from ninth to round out the top-five while six-time champion Billy Moyer ran sixth in his first Hell Tour start of the season. After fighting his way all the way up into the top-five from his 15th-place starting spot, Shannon Babb dropped out with five laps remaining, leaving him with an 18th-place result.

Mike Harrison brought his A-game into the 25-lap Feature and showed everyone why he is the tour’s only 50-time winner, putting the moves on mid-race leader Kyle Steffens just after halfway and driving off with the $1,000 check in his fourth career victory at Tri-City in Summit Modified action.

“We actually found something that we had screwed-up the other day on my other car, and we had it screwed up on this one too. Ever since we fixed that [problem], we’re back in business,” Harrison said in Victory Lane.

Harrison began his run to the front from outside Row 4 and quickly jumped into the podium, making the move for second on Michael Long on a Lap 9 restart. After several laps of digging to leader Steffens’ inside, Harrison finally got enough momentum down low and threw a big slide job into Turn 3 to take the top spot as they completed Lap 14. From that point onward, Harrison put it on cruise control.

Steffens, Long and polesitter Rick Conoyer were chasing Harrison down late in the race when they all came together after contact in Turns 3-4, ending each of their nights with results of 16th, 15th and 18th, respectively.

Dean Hoffman and 15-year-old Hunt Gossum assumed the podium spots on the restart and held them back around to the checkered for their best finishes with the Summit Mods this season.

A big 50th time in Summit Modifieds Victory Lane for the six-time champ begged the question of his plans to race on the tour this season and how those plans would affect his chances of a seventh championship. To that, Harrison put it very simply.

“I work for a living, so I have to go to work sometimes to pay the bills at home. But I will go to the races that I can physically go to that’s right for my team. The other ones, I just don’t, and I let the points play out the way they’re gonna play out,” Harrison said.