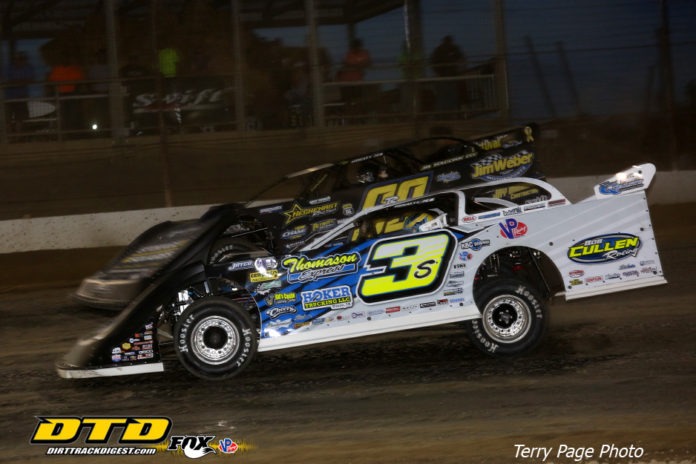 CLARKSVILLE, TN – A grand total of 90 Feature laps have been contested over the last two days with the DIRTcar Summer Nationals. Brian Shirley has led every single one of them.

The three-time and defending champion put on another dominant display of car control and finesse in lapped traffic Saturday night at Clarksville Speedway, leading all 50 laps of the Feature for his third Summer Nationals victory of 2020 and 29th of his career.

Shirley started on the pole of the Feature and took off immediately at the drop of the green, opening up a sizable advantage over Jason Feger and Jadon Frame. Over the course of 50 laps, Squirrel was forced to deal with several restarts, supplying his competition with more opportunities to get by him.

“Being the leader helps a lot,” Shirley told tour announcer Ruben Mireles in Victory Lane. “With the way the corner was, it just worked out where I could just hit my mark right.”

A big name amongst that competition was fellow Illinoisan Frank Heckenast Jr., who caught and passed Shirley for the win just three two nights prior at Springfield. Heckenast was right back at it on Saturday night after starting 11th and moving up as far as second before the final checkers, using both the high and low grooves to make moves on the head of the field.

By the race’s final stages, Heckenast had been locked in the middle of a close battle with Dennis Erb Jr. for second, which he surrendered for good on Lap 42. Regardless, another great points night on the podium for the #99jr team.

Back out front, it was simply another episode of Shirley’s domination, recorded. A couple late-race caution flags helped to restack the field in hopes of catching him, but to no avail. Shirley went on to collect the checkered and the check, worth another $10,000.

It’s shaping up to be an incredible battle to the finish for the coveted DIRTcar Summit Racing Equipment Modified Nationals trophy at season’s end. With the defending champion Nick Hoffman’s flag-to-flag win at Clarksville Speedway Saturday night, the race now gets a little closer.

Hoffman started on the outside pole and made it look easy, going virtually unchallenged for 25 laps as he cruised to his 28th career Summit Modifieds victory. He knew the pressure to perform was on, lining up next to UMP Modified hot shoe Lucas Lee, but was able to get the jump he needed to get out front heading into the first corner.

“When I drew the ‘2’ [pill], I felt like I could roll [Lee] on the start and then just try and protect getting into Turn 1, and it worked out,” Hoffman said of the initial start in Victory Lane.

However, one of his closest competitors, Mike McKinney, did not have the night he was looking for behind the wheel of his Elite Chassis #96. He got caught in a pile-up with several other cars on Lap 6 and retired to the pit area immediately.

With McKinney sitting at three wins and Hoffman now with two, the points battle is poised to go right down to the wire with 15 races still to go. Despite the fact that only the best eight finishes are counted toward a driver’s overall points total with the Summit Modifieds, they’re both fierce competitors and are each shooting for as many wins as possible by the end of the tour.

If they both reach eight wins, it could come down to some math to decide a champion.