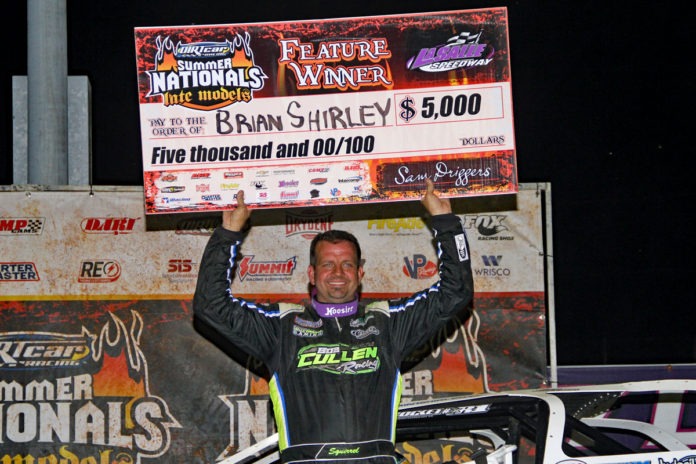 LaSALLE, IL – They say to be the best, you’ve got to beat the best. Not only did the defending DIRTcar Summer Nationals champion Brian Shirley beat every driver on one of the best rosters the tour will compete against all season, but he dominated them on Wednesday night at LaSalle Speedway for the 30th Summer Nationals victory of his career.

“This sport’s very humbling,” Shirley said in Victory Lane. “You can be good one night and be horrible the next. So, we’re just going to do the best we can do and take it as it comes.”

Several big-name drivers from the World of Outlaws Morton Buildings Late Model Series and beyond came out to challenge the regulars and veterans of the Summer Nationals Wednesday night, and it made for one stacked roster heading into the evening’s action.

Names like Chase Junghans, Boom Briggs, Tyler Erb, Kyle Bronson and more made the trip out to LaSalle for the track’s first event of 2020 to mix-it-up with former champions of the Hell Tour like Shannon Babb, Bobby Pierce and Dennis Erb Jr. But the name on the big check in Victory Lane at the end of the night was none other than the man who beat them all and led flag-to-flag in the 40-lap contest, Brian Shirley.

Shirley opened the program by setting quick time in Qualifying, winning his Heat Race and redrawing the pole for his Feature starting spot. Right from the drop of the green, Shirley’s Rocket Chassis #3s took command out front. Not even the lapped traffic he faced while clicking off the laps could slow his pace.

For each of the 40 Feature laps, Shirley drove virtually unchallenged and, by the time he had taken the while flag, had lapped the field up to ninth. Truly, an impressive feat for the defending champ.

“To be honest, every race we go to – whether it’s a Summer Nationals, World of Outlaws… Heck, I don’t even care if we go to a $1,500-to-win local race, you’ve gotta go into every race as it’s as tough as it could be. Any more of the competition is tough, it doesn’t matter who comes in, where you go, what you do. It’s just super tough,” Shirley said of the deep competition he faces each year.

As one of three drivers to sit with two-or-more wins on the tour so far this year, Tyler Erb had another terrific run on the podium in second, while Dennis Erb Jr. followed-up his Feature win at Clarksville last Sunday with a third-place effort.

The DIRTcar Summer Nationals action continues Thursday night at the Peoria Speedway with the completion of the July 9 show that was postponed due to rain. Catch all the action LIVE on DIRTVision.

He’s the two-time and defending tour champion, and now a three-time-straight Feature winner with the DIRTcar Summit Racing Equipment Modifieds. Needless to say, Nick Hoffman is on a roll.

After sweeping the Modified action in Clarksville last weekend, Hoffman wasted zero time in getting right back to his ways with another flag-to-flag victory Wednesday night at LaSalle Speedway.

The opening laps saw two of Hoffman’s biggest competitors retire early with issues right at the drop of the green. Will Krup brought out the caution on Lap 2 after breaking going through Turns 1-2, and Mike McKinney brought it back out on the restart as he spun in front of the field in the same corners. Both retired with just a single lap completed.

Back out front, it was all Hoffman’s race to lose, until a caution with less than five laps remaining restacked the field and put the six-time Summit Modifieds champion Mike Harrison right on Hoffman’s rear bumper.

Harrison showed Hoffman a wheel down low at first and then pulled-up alongside his Elite Chassis #7 but couldn’t make it stick. Hoffman shut the door on the inside after taking the white flag to seal the 30th Summit Modified race win of his career.

“I just had to get up on the wheel and try and get it done,” Hoffman said in Victory Lane. “I know Mike [Harrison] probably could’ve took me out on that last lap blocking him, but I appreciate him running me clean there.’

Picking up the race’s honor charger honors was 15-year-old Hunt Gossum, as he came all the way from 18th to finish 5th.

The DIRTcar Summit Racing Equipment Modified action continues Thursday night at the Peoria Speedway with the completion of the July 9 show that was postponed due to rain. Catch all the action LIVE on DIRTVision.