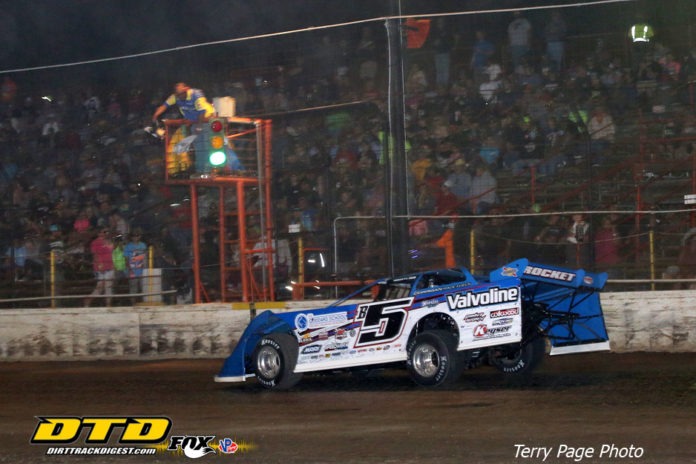 MAPLE PARK, IL – He hadn’t raced his family-owned #B5 Rocket Chassis since May, but it just doesn’t seem to matter which car he drives or what track he’s at. Brandon Sheppard has been just plain dominant so far this year.

B-Shepp invaded the DIRTcar Summer Nationals Late Model circuit Tuesday night at Sycamore Speedway and put a whooping on the field, winning in his first tour start this season by over six seconds and collecting the 21st Hell Tour victory of his career.

Coming off a long weekend with the World of Outlaws Morton Buildings Late Model Series at Cedar Lake Speedway, Sheppard was looking forward to getting back to work with his #B5 machine this week and had a very limited amount of time to prepare for it.

But that just didn’t seem to affect him. Sheppard stalked his competition at the drop of the green, waiting for the right moment to pounce. It didn’t take long, as he made the move around Frank Heckenast Jr. for second on Lap 3, then overtook the defending champion Brian Shirley for the lead one lap later.

Using all three lanes of the racetrack throughout the race, Sheppard swiftly maneuvered through lapped traffic and actually began pulling away from Shirley in the caution-free race.

Iowan Jeremiah Hurst did his best in his late-race rally efforts to catch Sheppard, but ultimately came up one spot short. He came on strong in the second half of the race, passing both Heckenast Jr. and Shirley to reach the runner-up spot.

As the laps wound down, it became more and more clear – nobody was going to touch the B5 car Tuesday night. Sheppard crossed the line untouched, collecting $5,000 for the victory.

Shirley capped-off the podium in third, Heckenast Jr. was fourth and Jason Feger rounded out the top-five.

Nine starts. Six wins. Zero finishes outside of the top-two.

“I really love coming to this place, it always fits my driving style – slick and smooth,” Hoffman said in Victory Lane. “I knew Will [Krup] was gonna be pretty good there, we tried some stuff on his car for the Feature. He was kinda complaining after the Heat Race, so I gave him a few things to try that I haven’t done yet. He was pretty good, kept showing he was close to me. It was really cool to sweep the top-three again for the Elite [Chassis] cars, and we’ll keep rolling tomorrow.”

Coming into the week, the top-four drivers in the Summit Modified points standings were drivers of Hoffman’s chassis brand Elite Chassis. Hunt Gossum was fourth in line, but not at the track Tuesday night.

Will Krup and Mike McKinney also stood on the podium after the checkered fell, having chased down Hoffman the entirety of the race. They each drove smart, clean races and it paid off in the end.

The DIRTcar Summit Modified action continues Wednesday night, Aug. 12 at the Fairbury Speedway in Fairbury, IL, for another 25-lap, $1,500-to-win main event in Round #17 of the 2020 tour. Watch every lap live on DIRTVision presented by Drydene.