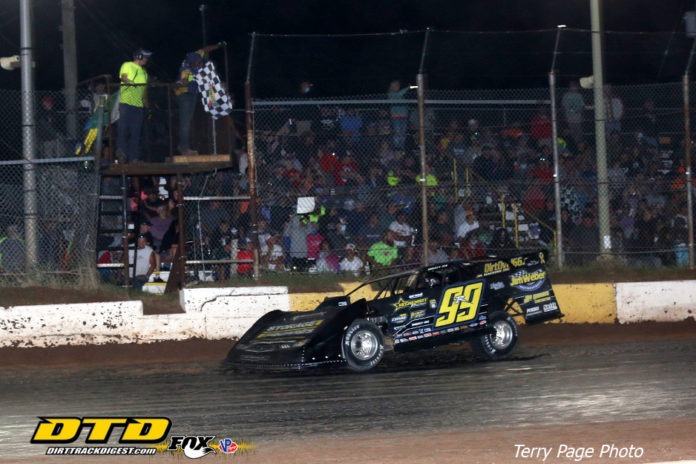 MUSKEGON, MI – Right when he needs it the most, Frank Heckenast Jr. pulls through.

The Frankfort Flyer was facing a 150-point deficit coming into the Thursday night’s event at Thunderbird Raceway, hot on the tail of his first DIRTcar Summer Nationals championship. That gap has now shrunken to 135 after scoring his third Hell Tour Feature win of the season, leading all 40 laps for the $5,000 top prize.

This makes two Feature wins in Racing Electronics Champions Week for the Jim Weber Motorsports team after their dominating victory Tuesday night at Kankakee County Speedway, and three on the season thus far – a new season-high on the Summer Nationals circuit.

Heckenast told Summer Nationals announcer Ruben Mireles in Victory Lane that a big part of the team’s abundant recent success can be attributed to their recent personnel additions.

“We got a new crew chief, Cory [Fostveldt]. He didn’t come into our program until March, April… it wasn’t that we weren’t gelling, it’s just that his ideas were one way and mine were another. Now that we’re both on the same page, we can really do some damage,” Hecknast said.

Of his three victories this season, Thursday night’s may have been his most impressive. Heckenast immediately jumped to the lead from the outside pole and set a torrent pace, reaching lapped traffic in less than 10 laps.

Inside, outside, in the middle – Heckenast dodged and weaved his way through the first few waves of lapped traffic and eventually settled into a comfortable lead ahead of a terrific battle for second going on behind him.

Gustin emerged as the big winner in the battle, shooting to the extreme high side and snatching away the second spot from Marcoullier as he neared a clear spot in traffic and used it to rapidly close the gap on Heckenast. Just as Gustin was about to catch the rear of Heckenast, a caution flag was displayed, restacking the field and putting a clear track in front of the leaders.

Despite Gustin’s strength on the high side, Heckenast didn’t flinch. He gassed it up on the high side and sped away from The Reaper’s challenge, including one on an additional restart after a second caution was thrown with just three laps remaining to collect his fifth career Summer Nationals victory.

Heckenast continues his points chase with the rest of the Summer Nationals Late Model field, now heading into the final two rounds of competition – Friday, Aug. 21 in the tour debut at Tri-City Motor Speedway and Saturday, Aug. 22 at Merritt Speedway in Lake City, MI.

Catch every lap of action live on DIRTVision presented by Drydene.

Last year, Nick Hoffman set a new DIRTcar Summit Racing Equipment Modified Nationals record for most Feature wins in a single season at 13, driving his own personal Elite Chassis #2. This year, behind the wheel of NASCAR veteran Justin Allgaier’s #7, he’s got a chance to break it.

After another dominating victory Thursday night at Thunderbird Speedway, Hoffman is now two wins away from tying his own record and three away from breaking it with just four races remaining.

The Thrill from Mooresville was challenged early in Thursday’s Feature event by West Virginian KC Burdette, who led the opening three circuits before Hoffman took the spot away on the low side.

In a caution-free race, Hoffman ran away with the victory untouched for his 37th career Summit Modified victory and 11th of the season.

As he’s said so many times before, Hoffman loves the slick racing surfaces to race on, which was exactly what he got Thursday night.

“When I go to bed, I dream of racetracks like this – just polished-off and slick,” Hoffman said. “This thing is just perfect when it gets like this.

“You could maneuver anywhere, at least I could. I could run the top and pass them lapped cars wherever I needed to and didn’t really get held up by them.”

Hoffman continues his quest for the wins record against the rest of the Summit Modified field Friday night, Aug. 21 in the tour debut at Tri-City Motor Speedway in Auburn, MI. Catch every lap of action live on DIRTVision presented by Drydene.