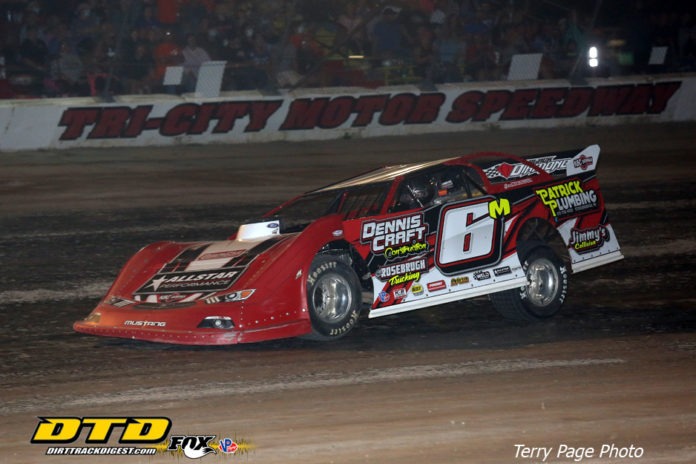 AUBURN, MI – He’s cleared the scales. The crowd roars. The Patrick Plumbing #6M rolls onto the Tri-City Motor Speedway front-stretch and into one of the wildest session of doughnuts seen all year.

Dona Marcoullier is a DIRTcar Summer Nationals Feature winner for the first time in his career.

The Houghton Lake, MI-pilot upset the DIRTcar Late Model Hell Tour regulars Friday night after winning a big battle for the lead in traffic with Frank Heckenast Jr. in the closing laps.

Pulling into Victory Lane, Marcoullier was so excited that he forgot to put the car in-gear, and it began to roll forward slightly as he celebrated the $10,000 victory atop his Black Diamond Race Car at one of his regular weekend tracks.

“This is awesome! This is our home track – they see me here every week, this is my favorite place, and I’m glad we got to show what we were capable of,” Marcoullier said.


His magical run started from outside Row 4, getting a great jump on the start and cracking the top-five inside the first five laps. Marcoullier stayed glued to the bottom and worked his way up into the podium by Lap 15, going by the likes of Travis Stemler, Rusty Schlenk and Ryan Gustin on his way up.

Heckenast Jr. had led from the pole since the drop of the green and was looking good for a third Feature win of the week, maneuvering through lapped traffic with ease and nailing the restarts. As the laps wound down inside 10-to-go, the lapped traffic got heavy, and Marcoullier was beginning to reel-in Heckenast.

As Heckenast struggled to get by a few slower cars, Marcoullier saw the open door on the very bottom of the 3/8-mile and walked through, swiping the lead away as they completed Lap 43.

Marcoullier took Schlenk with him underneath Heckenast for second, as did Ryan Gustin on the top side. The Marshalltown, IA-native had another terrific night of action, winding up with the last spot on the podium after a runner-up finish the night before at Thunderbird Raceway.

As Heckenast slipped back to fourth, Marcoullier could see the light at the end of the tunnel. With Schlenk right on his tail, Marcoullier didn’t crack under the pressure from behind and brought home the victory in the tour debut at TCMS.

“To come from eighth, it’s awesome,” Marcoullier said The Summer Nationals… I was happy with third last night and now we get to pull this off.”

With his victory, Marcoullier becomes only the second driver from the state of Michigan to win a DIRTcar Summer Nationals Feature in the last 10 years.

The 35th annual DIRTcar Summer Nationals tour comes to a close Saturday night at Merritt Speedway in Lake City, MI, where the Late Model champion will be crowned, and a cap will be put on this terrific season of racing action. Watch every lap live on DIRTVision presented by Drydene.