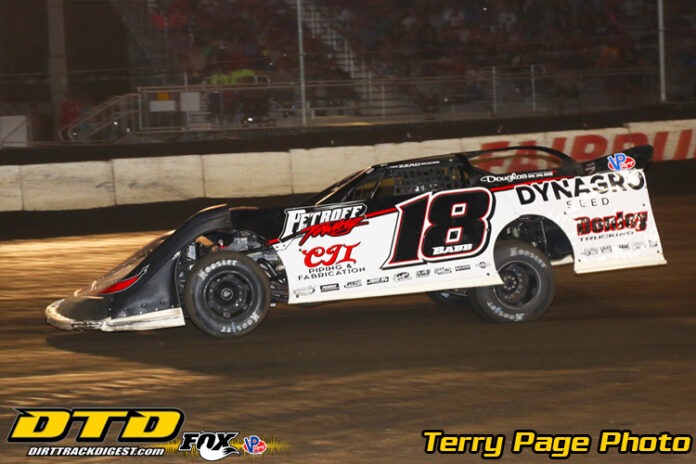 Babb, of Moweaqua, IL, found a sudden burst of speed late in the race around the bottom lane of Fairbury Speedway Saturday night and blew by his opponents for a $10,000 grand prize and his 99th career DIRTcar Summer Nationals Feature win.

“It’s special right here at Fairbury. $10,000-to-win Summer Nationals always meant a lot to us. Growing up, it was everything. These are big races,” Babb said.

While it was a big win at a big race, it was also special to Babb on a personal note. Six years ago, he came into Fairbury after the birth of his daughter Finnlee and captured his 90th career Hell Tour victory. His 99th victory Friday night came six years to that date, at the very same track.

Babb’s second appearance of the season with the tour put him in a similar situation to the previous night at Tri-City Speedway – starting the 50-lap Feature from the third row. But it didn’t all play out in exactly the same way.

Babb quickly made his way up to third from sixth but decided to switch lanes en route to catch the leaders, which ended up sending him all the way back to eighth. He rode there several laps, just before the halfway mark, when his car came to life.

Indeed, his Team Zero Race Cars chassis #18 did come in. It only took 11 laps for the four-time Summer Nationals champion to pass every car ahead of him.

Like his nicknamesake, The Moweaqua Missile launched off the bottom lane of the quarter-mile and made the move underneath Tanner English for the lead on Lap 35. Within 10 laps, Babb had opened up a gap of over two seconds and pushed it to over three seconds by the time he took the checkered.

English held off Devin Moran for second while Frank Heckenast Jr. and Bobby Pierce completed the top-five. Defending Summer Nationals champion Brian Shirley started on the pole but slipped back to seventh by the race’s end. Local favorite Mike Spatola arrived late to the track and was forced to start at the tail of a Heat Race, but made good on the night by transferring in through the Last Chance Showdown to finish ninth.

Now with $10,000 in his pocket, Babb’s already looking forward to Fairbury’s biggest event of the season – the Prairie Dirt Classic.

“This is the highlight of our season coming here. We can’t wait to get here at the end of July, they’re really coughing up some money for that race,” Babb said.

Through those five races, there’s been 130 total Feature laps contested. Hoffman has led every single one. Even with the tough competition on the roster for Saturday night’s race at Fairbury Speedway, nothing could shake his concentration.

The one and only six-time Summit Modified champion Mike Harrison, of Highland, IL, made the trip to Fairbury and initially looked to be a serious threat to Hoffman’s win streak, winning his Heat Race and lining up fourth for the start of the Feature.

Harrison jumped right into second on Lap 3 of the 30-lap event, pounding the cushion very aggressively, engine wound-up as he went in hot pursuit of leader Hoffman. But it didn’t last him the whole race.

With 11 laps remaining, having already scraped the outside wall several times, Harrison’s right-front tire gave out and sent him into the Turn 1 wall, ending his night early.

“He gets away with it a lot of times running up there, and sometimes it’ll bite ya,” Hoffman said of the incident. “Right before that happened, I found a ton of grip about a lane off the cushion. I felt like it would’ve been a pretty good race there because I picked up a bunch of pace.”

Curt Spalding inherited the runner-up spot for the restart but did not have anything for the three-time and defending champ Hoffman, who drove away with the $2,000 winner’s check. Nick Allen, Tommy Sheppard Jr. and Allen Weisser completed the top-five.