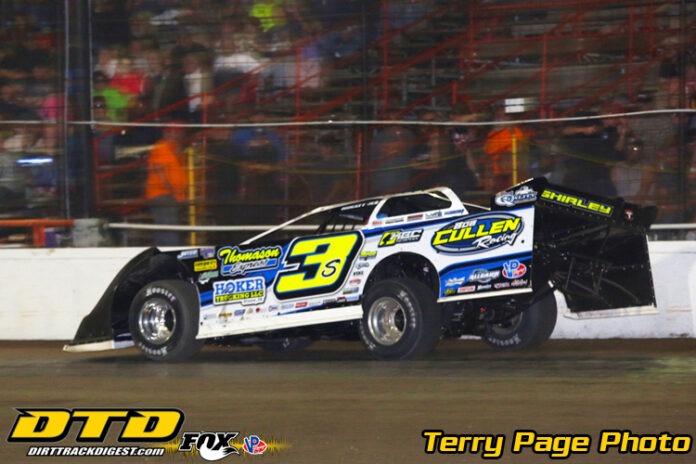 MAPLE PARK, IL – Never doubt the heart of a champion to come alive when it matters most. Defending Hell Tour champion Brian Shirley has gone back-to-back.

After a trying yet competitive first week, Shirley and the Bob Cullen Racing team regrouped after a few days off and have since struck gold, winning Wednesday night at LaSalle Speedway and following that up with another dominating performance Friday night at Sycamore Speedway for his 35th career DIRTcar Summer Nationals victory.

But this flag-to-flag Victory Lane trip gave Shirley quite the challenge, with three-time tour champion Bobby Pierce stalking him each and every lap.

Shirley, of Chatham, IL, started on the pole and jumped out to the lead in the early going; Pierce moved to second after an early restart and immediately set his sights on Shirley’s #3s.

Leaning hard on the massive cushion, built throughout the qualifying events from the rain the track had taken earlier in the day, Pierce quickly closed the short gap on Shirley and made a strong early challenge for the top spot, but Shirley was able to scoot away with some smooth driving through the middle.

As if the pressure from behind wasn’t enough, Shirley faced his first pack of slower traffic just before halfway, but skillfully maneuvered through it. Pierce, however, took a bit more time to wade through it and lost some ground on Shirley – going as far back as 2.5 seconds before a caution re-stacked the field.

Shirley opened up another gap after the restart, but Pierce once again came back around to try him, nearly taking the lead from him as they closed in on the home stretch.

“I felt like I couldn’t shake him,” Shirley said. “I got away a little bit, then he’d catch back up, so I was just trying to find something to see if I could get some distance on him. The 32 is good for a reason, and we’re just lucky that we were able to stay ahead of him.”

Shirley dipped back into lapped traffic once more in the final laps, but it wasn’t enough to slow him for Pierce to catch up. The four-time tour champion held off the field for 40-straight laps to collect the $10,000 check, making it back-to-back victories in three days.

In Victory Lane, an emotional Shirley reflected on what the burst of success in Week #2 meant to him, thinking of his family and his responsibilities as both a husband and a father.

“Everybody, they just don’t understand. As I’m going home tonight, I’m stopping to pick up one kid and going to get him home. It’s just a lot of emotion, but we’ll keep digging and maybe get another win here or there,” Shirley said.

The Summer Nationals action continues Saturday night, June 26, with Round #10 from the Federated Auto Parts Raceway at I-55. Catch all the action live on DIRTVision presented by Drydene.

This time, Hoffman conquered the fast and heavy Sycamore Speedway – a place where he also took the checkers last year. Despite a smaller car count than he’s used to seeing, Hoffman still faced some tough competition up front in Mike McKinney, Hunt Gossum and Kelly Kovski. Once again, he denied them all for his 45th career Summit Modified victory.

“Kinda shook the cherry tree tonight with only nine cars, but I’m here to win races and try and string as many of these together as I can,” Hoffman said.

Looking at the high-piled cushion that outlined the corners from the rain the track had taken earlier in the day, Hoffman decided to take his usual route in maneuvering through – right through the middle.

“I was watching that Late Model race and it got pretty ledged-up, so I surely didn’t wanna run up there,” Hoffman said.

The race went green-to-checkered with Hoffman leading every lap, now bringing his total laps led to a still-perfect 175-for-175. The win also brings him to within seven of tying Mike Harrison for most all-time, and within seven of breaking his own record for the most wins in a single season at 14.

“Racecar’s so balanced, I can pretty much go anywhere and it’s really fun to drive right now,” Hoffman said.

The Summit Modified action continues Saturday night, June 26, with Round #10 from the Federated Auto Parts Raceway at I-55. Catch all the action live on DIRTVision presented by Drydene.