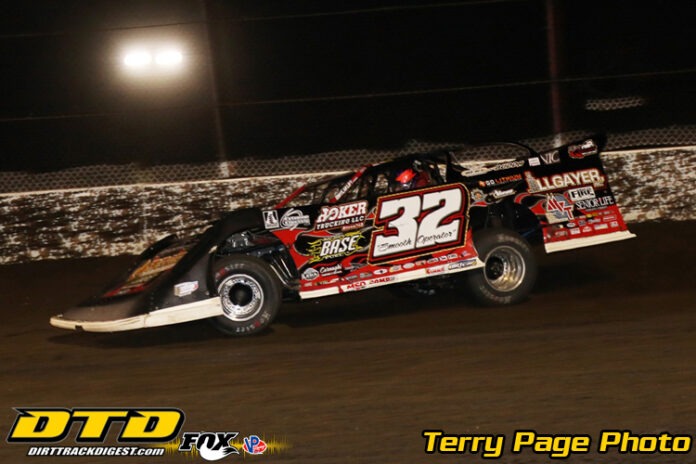 JOLIET, IL – July 2, 2021 – Like the hot rod flames down the side of his racecar, Bobby Pierce has been on fire this week.

The three-time DIRTcar Summer Nationals champion bagged his third consecutive Feature win Friday night at The Dirt Oval at Route 66 in dominating fashion once again, leading all 30 laps to collect the $10,000 check and his fifth Hell Tour Feature win in the first 10 races.

Pierce started outside pole and received an early challenge for the lead from Frank Heckenast Jr, who got a big run out of Turn 2 and slipped underneath Pierce going down the backstretch. But Pierce got him back quickly with a crossover move to the inside and led the first lap.

Heckenast was not going away easy, though. The two engaged in a side-by-side battle for the lead over the first three laps around the ultra-fast three-eighths mile, but Pierce soon got the upper hand and began to open a small gap.

“To beat Frankie [Heckenast] on that start of that race was key,” Pierce said. “When I got by him after the first couple of laps battling with him, from there I just had to hang on.”


Heckenast was actually keeping pace with Pierce through the first half of the race. But then, the leader stepped on it. As he approached lapped traffic, Pierce began to widen the gap even more. He quickly began moving through slower cars while Heckenast lost him as the laps clicked off.

“It was pretty sketchy there for a little bit. Right before that caution came out, there were some guys I was lapping three times, some were two, some were the first time,” Pierce said.

One final opportunity came knocking for Heckenast when the caution flew with four-to-go. Pierce’s near five-second lead had been erased and Heckenast lined-up right on the #32’s rear bumper for the restart.

They hit the gas out of Turn 4 and Pierce took off, leaving the #99JR and the rest of the field in his dust as he sailed across the finish line to collect his 32nd career Summer Nationals victory.

The Summer Nationals action continues Saturday night, July 3, at Fayette County Speedway, where the Late Models will battle it out for another $10,000 grand prize in race #11 of the 2021 Hell Tour campaign. Catch all the action live on DIRTVision presented by Drydene.

The latest edition came in another dominant performance at The Dirt Oval at Route 66, where Hoffman stayed perfect by setting quick time in Qualifying, winning his Heat Race and leading all 20 laps en route to his 46th career Feature win with the tour.

“Our racecar’s really good. I can’t wait to read Facebook tonight about how much cherry-picking and all that,” Hoffman said in Victory Lane with a chuckle.

While he was up against only six opponents, the race got interesting when fellow Elite Chassis driver Hunt Gossum appeared to be reeling in Hoffman in the final half of the race. But with just five laps remaining, the teenage Modified hot shoe went up in smoke and pulled to the infield, giving up second to another Elite pilot, Kyle Hammer.

Hammer crossed in second, and while Gossum was forced to watch the rest from the infield, Hoffman knew both of the cars he built ran great, regardless of their finish.

Hoffman’s eight consecutive victories will now be put into the Summit Modified record books as the longest win streak in its 11-year history. But that’s where the streak will end, for now. The three-time and defending champion will head next eastward to Indiana to compete in a DIRTcar UMP Modified special at Lawrenceburg Speedway, which means a new face will appear in Victory Lane when the tour heads to Fayette County Speedway Saturday night.

The Summit Modified action continues Saturday night, July 3, at Fayette County Speedway with a $3,000-to-win special, co-sanctioned with the American Modified Series. Catch all the action live on DIRTVision presented by Drydene.