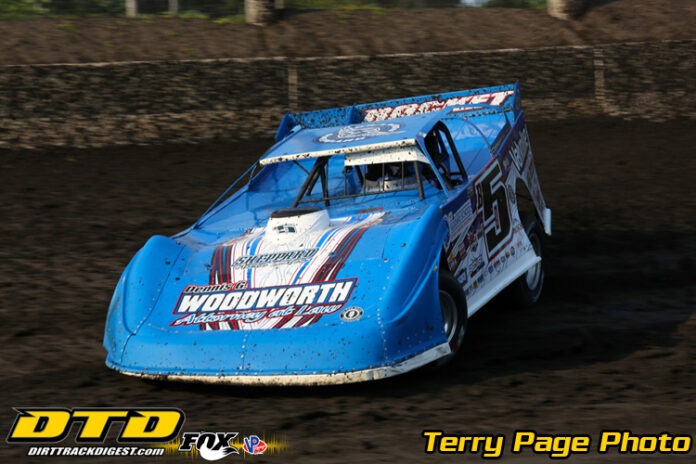 LINCOLN, IL – There’s nothing quite like the feeling of being around family and friends for a big 4th of July celebration. That was the scene Sunday night in Victory Lane, where Brandon Sheppard celebrated back-to-back DIRTcar Summer Nationals Feature wins to a thunderous applause from the Lincoln Speedway crowd.

Piloting his family-owned #B5 Rocket Chassis that garnered him such a large fanbase around the bullrings of Illinois, Sheppard bagged his fifth career Hell Tour victory at the quarter-mile with a hefty payday, taking home $5,000 for the Feature win and an additional two-grand for topping the weekly points standings.

He led green-to-checkered in a non-stop Feature on Saturday night at Fayette County Speedway for his first win of the week, but Sunday night was a different scenario. Sheppard, of New Berlin, IL, struggled in the opening laps to keep pace his strongest competitor, Brian Shirley.

Shirley jetted out to the lead from the pole and led the first 14 circuits, pulling away from Sheppard slightly each lap, before disaster struck his Bob Cullen Racing entry.

Shirley looked fine heading into Turn 1 on Lap 15 until he slowed dramatically at the exit of Turn 2 and immediately pulled to the infield. Broken components in the rear-end were reported as the culprit, forcing the four-time and defending Summer Nationals champion to watch Sheppard take charge of the race from the infield. He was left with a 20th-place finish.


“I was good in the middle at the beginning, but Brian was definitely better than I was,” Sheppard said of the situation in Victory Lane. “I hate to see that for him. I really would’ve liked for him to have been there at the end so we could have raced.”

Now in sudden control of the race, Sheppard maintained his pace through lapped traffic and kept it out front of Jason Feger and Frank Heckenast Jr. Bobby Pierce soon cracked the whip and began his march to the front, getting by Heckenast on Lap 22 and Feger seven laps later.

A caution with eight laps-to-go restacked the field and put Pierce right on Sheppard’s bumper for the restart.

“I saw the 32 was behind me after that caution, so I knew I was gonna have to work for it,” Sheppard said. “He’s been really tough.”

But the B5 got a great launch off of Turn 4, propelling him away from the rest of the field and across the finish line for his 26th career Summer Nationals Feature win.

“I was way too tight for the top. Man, I’m kinda wore out after that one. The cushion was big, and I was fighting this thing, but we were able to get it done,” Sheppard said.

Pierce drove it home in second for his fourth podium finish of the week, followed by Jason Feger, who notched his best finish of the season so far. Tanner English and Frank Heckenast Jr. completed the top-five.

The Hell Tour is off on Monday, but will return to action on Tuesday night, July 6, for its debut at the half-mile Knox County Fair Raceway. Catch all the action live on DIRTVision presented by Drydene.

He took a night off, but never missed a beat. Nick Hoffman has won his ninth DIRTcar Summit Racing Equipment Modified Nationals Feature of 2021.

Lincoln Speedway played host to Hoffman’s return to the tour Sunday night after racing elsewhere on Saturday, but it was as though he never left. The three-time and defending Summit Modified champ once again led every lap of the Feature and pocketed another $1,500 check.

“I just got out to a decent lead, and I can watch that big DIRTVision board off of Turn 2 and see how big of a lead I had,” Hoffman said. “That helps a bunch.”

He and his #2 Elite Chassis again went unchallenged for the lead, building up over a five-second lead in traffic before a yellow with 10-to-go erased it. But Hoffman held strong on the restart, defending against his uncle, Dean Hoffman, and six-time Summit Modified champion Mike Harrison.

Harrison got by Dean and Kenny Wallace before the final restart with five laps left, which he was able to ride to the finish for his best Feature finish with the tour so far this year.

Try as he did, however, Harrison was unable to catch Hoffman before the checkered. In Victory Lane, Hoffman admitted he may have been able to get the car even better than he had it.

“I felt like I could’ve made another adjustment and been even better, so I’ll just write that in the notebook for next time,” he said.

The Summit Modifieds are off on Monday, but will return to action on Tuesday night, July 6, for their debut at the half-mile Knox County Fair Raceway. Catch all the action live on DIRTVision presented by Drydene.