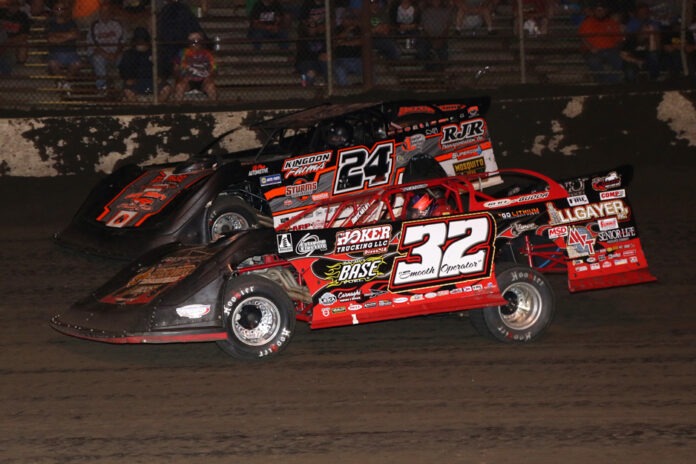 MACON, IL – It’s special just to win even one Herald & Review 100, let alone three. Bobby Pierce is now a three-time winner of the DIRTcar Summer Nationals’ most prestigious event at Macon Speedway, just one shy of tying his father Bob for second-most on the event’s all-time win list.

The points leader was faced with the ultimate test of keeping his car out front for well over half of the 100-lap race while the rest of the top-five hunted him down in traffic. But first, Pierce had to get around one last car in front of him – Brian Shirley.

Shirley, of Chatham, IL, grabbed the lead from polesitter Ryan Unzicker on Lap 3 and proceeded to open up a sizable gap over Pierce before diving head-first into lapped traffic. A few early cautions kept the field restacked and out of thick traffic as the defending Hell Tour champion continued his strong run out front. But soon, disaster struck the Bob Cullen Racing #3s.

The caution flag came out on Lap 23, but as soon as the caution lights turned on, Shirley’s right-rear tire went flat. He took the car to the work area and got it changed before the restart but was forced to start from the tail, surrendering the lead to Pierce.

“We got pretty lucky tonight with Squirrel [Shirley] having that flat,” Pierce said. “It would have been tough to get by him.”


Now with the lead for the first time in the race, Pierce immediately knew his one mission objective.

“Brian had that flat on that caution, and I was like, ‘well, here we are.’ So, just ride from there and don’t make any mistakes,” Pierce, of Oakwood, IL, said.

And that’s exactly what he did. From that point forward, it became Pierce’s race to lose. He opened up a sizable gap in traffic and began clicking off the laps. He was met with several more restarts, but denied all challengers behind him, even with slower traffic ahead of him.

“It got pretty hairy there in lapped traffic a few times. Glad we were able to keep the nose clean and hang onto it,” Pierce said.

The field sat under a temporary red flag with three laps remaining while an accident with cleaned up in Turn 1. During that stoppage, Pierce was left to cool off and think about the task ahead of him, which he could have done without.

Unzicker held on for second – his best finish of the season with the Summer Nationals thus far. Shannon Babb crossed in third, ahead of Myles Moos, who was later disqualified for being light at the scales. This moved Logan Martin into fourth and Gordy Gundaker into fifth. Shirley was able to climb back for an eighth-place finish.

The Summer Nationals Late Models are back in action Friday night, July 9, at Farmer City Raceway for the first $10,000-to-win Feature of the week. Catch all the action live on DIRTVision presented by Drydene.