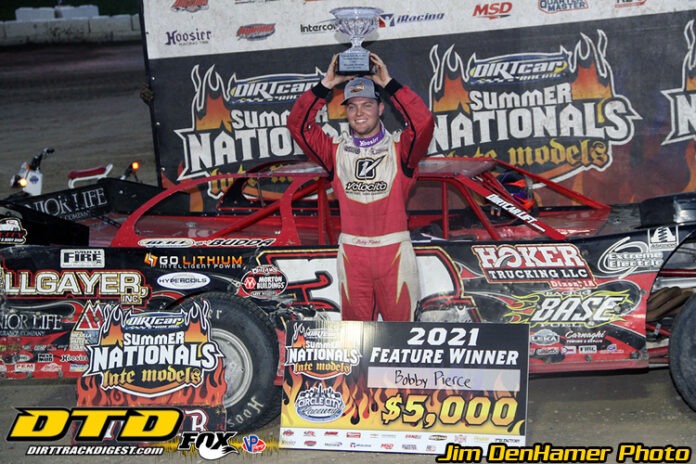 INDIANAPOLIS, IN – As a three-time DIRTcar Summer Nationals champion, Bobby Pierce knows a lot of the tracks on the schedule like the back of his hand. And while no driver in the pit area had any major abundance of laps around the Circle City Raceway, Pierce showed he knew it better than anyone else in the field Wednesday night, earning his eighth win of the season in his second-ever appearance at the quarter-mile bullring.

Pierce was on the roster for the only other Super Dirt Late Model race contested at the newly constructed Circle City facility back in early June, where he finished 12th against the World of Outlaws Morton Buildings Late Model Series stars. It was a solid first go at the all-new facility, but Pierce knew when he came back for the Hell Tour stop, he’d have the advantage over any driver getting their first look at the track.

“Just knowing the shape of the racetrack is huge,” Pierce, of Oakwood, IL, said in Victory Lane. “Where the wall comes in, where it comes out, and where the infield is – just the entire shape of the track. You get the feel of the banking, where it might dip and where it doesn’t, and really use that to your advantage.”

Pierce powered to the lead from the pole at the drop of the green and immediately took off, opening up a small gap over Spencer Hughes in the early going. The race’s lone caution flag flew 15 laps in and restacked the field, but Pierce was feeling the racey track conditions and his car setup and galloped away from the pack once again.

“[The track] really impressed me a lot tonight. The top came in, and I think if I started a little farther back, I could’ve maneuvered around and got to the front. So, big thanks to everyone with the racetrack – they did a hell of a job,” Pierce said.

At the drop of the checkered, Pierce’s lead stretched over seven full seconds in traffic. In Victory Lane, Pierce credited his crew for a heads-up tire decision in the eleventh hour, swapping out the softer Hoosier LM20 they had on earlier for the harder LM40 just before go-time.

“We were all scrambling around back there in the pit area, deciding on which tire to run, and I think we chose right,” Pierce said.

Behind him, an intense battle for the two remaining podium spots was boiling over between Hughes, Tanner English and Joe Godsey. Hughes maintained the runner-up spot for most of the race until English caught him in traffic and began trading passes back-and-forth for the spot. While those two were at war, Godsey came creeping up on the bottom and took the spot away from them both on Lap 34.

Hughes regained the position to Godsey’s outside and held it again until the final lap, where Godsey snuck by him on the bottom once again and beat him to the line to notch his best career Summer Nationals finish of second. Hughes settled for third while English and three-time DIRTcar Late Model national points champion Rusty Schlenk, making his first Hell Tour appearance of the season, rounded out the top-five.

More Summer Nationals action is on deck for Thursday night, July 15, when the DIRTcar Late Model drivers hit Thunderbird Raceway in Muskegon, MI, for another $5,000-to-win showdown in the first of six races in the state of Michigan this season. Catch all the action live on DIRTVision presented by Drydene.

Thirteen starts. Thirteen wins. But this one was Nick Hoffman’s closest win yet.

After redrawing third-best before the debut Feature for the DIRTcar Summit Racing Equipment Modified Nationals at Circle City Raceway Wednesday night, Hoffman had his consecutive laps-led streak broken at 290 when polesitter Tyler Nicely led the opening four circuits to a three-car battle for the lead around the brand-new quarter-mile oval.

“I was really worried about that redraw,” Hoffman said in Victory Lane. “Obviously, I had to pass somebody tonight, so Facebook should be pumped up about that.”

Outside polesitter Dylan Woodling had a stellar run going on the outside and swiped the lead away on Lap 5. But soon after reaching the backstretch, his #3w appeared to lose power instantly as he slowed into Turns 3-4, giving up the lead to Hoffman still with 20 laps left.

Hoffman took off on the restart and opened up a solid gap over Nicely as he approached lapped traffic. He maintained this advantage until the closing laps, where the traffic got two and three-deep in front of him. Hoffman struggled to cleanly maneuver through them at first, and Nicely was able to close the gap completely with under five laps remaining.

“[Crew member Shawn] showed me I had a pretty decent size lead, and then it went to nothing. I could see [Nicely] down there, and I just had to use that one lapped car up off of Turn 4… I gotta go, y’know? They’re having their own race, you can’t blame them for that. It’s just, at some point, you gotta go, and I got a little aggressive with him and tore it up a bit,” Hoffman said.

Hoffman did make contact with one of the slower cars to get by, but he was able to maintain the lead. A final restart with one lap left restacked the field and gave Nicely one final chance at the three-time champ, but Hoffman pulled away at the drop of the green to his 51st career Summit Modified win – one that also tied his own record for most in a single season.

The Summit Modifieds are back in action Thursday night, July 15, at Thunderbird Raceway in Muskegon, MI, for another $1,500-to-win showdown in the first of six races in the state of Michigan this season. Catch all the action live on DIRTVision presented by Drydene.